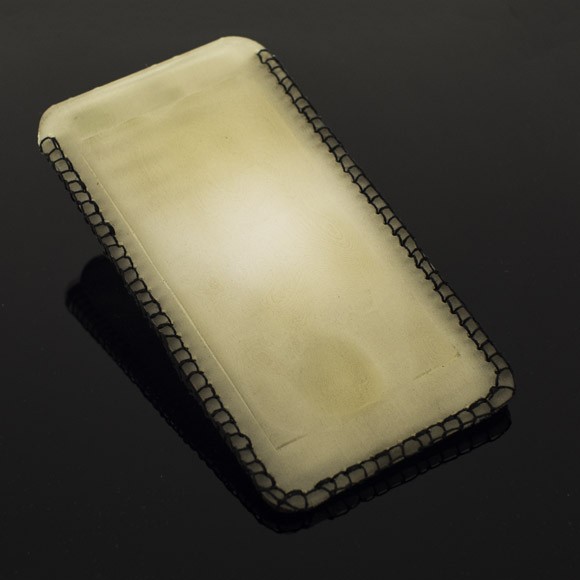 Departing from the question of how digital media is understanding touch and what actually people expect from touch in a technological world, the project discusses the current technology narrations of touch from a media archeology perspective and excavates the materiality of touch relations with a specific artifact: the Smart phone.

Since the last two decades, touch as a sense that could be extended by means of technology has become a major topic for interaction design. Considering everyday activities of people with technology (ubiquitous computing and tangible interactions) meant including also spatial and tactile relations, while simulating presence in times of internet communications (telepresence and haptic interactions) could benefit from stimulating other senses apart from sight and audition. These two technological motors developed narrations of touch that are apparently opposed: touch as ‘closeness and intimacy’ vs touch as ‘strangeness and monstrosity’. Why do this narrations of touch appear and how can we transform this status quo of touch?

By a media archeological methodology of finding Topos (cliches or recurrent narrations that spread and repeat in time and different cultures), both strangeness and intimacy as narrations of touch within interaction design were connected to what can be called a ‘tactiloclasm tradition’ in western culture and the return of touch as the ‘other’. Closeness and intimacy are connected to tactiloclasm as they present a private and pleasurable immaterial touch that is clean and free of any co-implication: the desire of touching is hidden in a black box avoiding a confrontation with tactiloclasm’s tradition. By the other hand, the narration of touch as strangeness resembles a nostalgia for a supposed primitive fetishistic touch that presents tangibility (materiality) in digital media as strange, monstrous, critical or subversive.

Between Monsters and White Collar Criminals 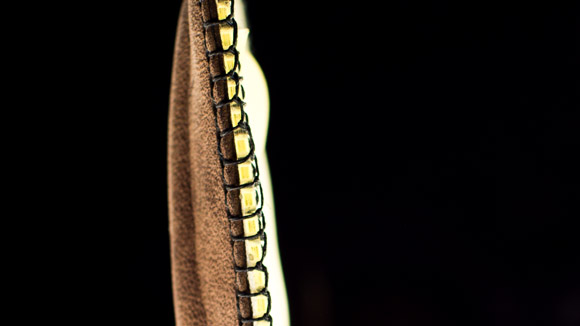 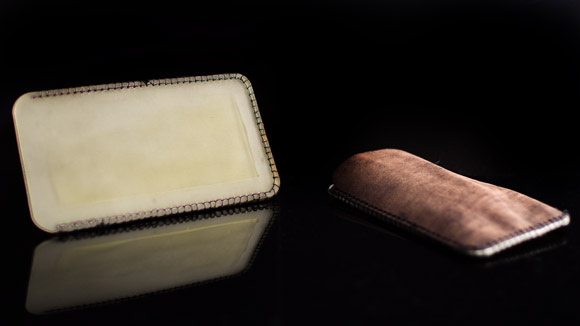 Presented as a design inquiry, the smart phone cases made for this project intend to turn around the found narrations of technological touch. Smart phones linked to haptic interactions (touch as closeness and intimacy), present a clean and immaterial touch which gives them an aura of being distant and independent from their materiality. By using a fingerprinting powder and a uv lamp, the fat on the screens of 5 smart phones was photographed. These photographies are rendered and processed as 3d height maps and later 3d printed as a main texture for the front of the case.A brown leather was used for the back of the case and a yellowish transparent plastic was 3d printed for the front of the case. As fat traces are excavated from the touch screens of individual smart phones, a monstrous-primitive touch relation between devices and their owners appears. Although the sampling of fat traces cannot show a long term relation between the owners and their devices, the smart phone cases reveal a material bond between them. The co-implication of these two entities can be sensed. 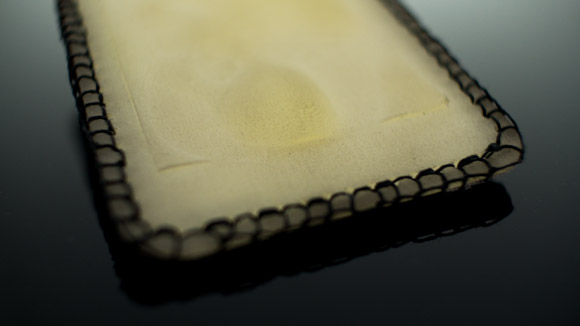