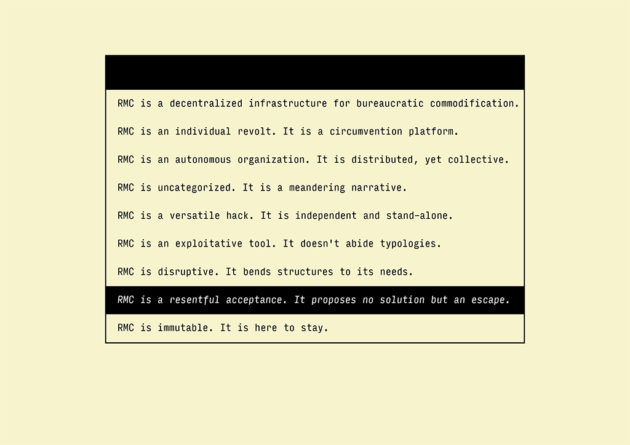 Rest My Case is a reappropriated legal term which finds its usage in the daily speech despite it being from straight out of a quintessential bureaucratic realm. In RMC, a case is a commodified, individual, bureaucratic experience. In its imperative form the phrase turns into a gentle call to revolt. This constant subversion or “playfully defiant attitude” (Coleman 2013) within RMC sets the tone in which other dualities also resonate.

Among a few concepts that were upheld during the conception process, physical space as an architectural embodiment of bureaucracy is one of the keystones of RMC because of the built-in performativity and materiality occurring constantly in these very spaces. This perception is also emphasized through the spatial constraints embedded in the work which are intended to always refer back to the architectural/urban representation of an institution. Furthermore, to counter the impersonal aspect of bureaucracy RMC introduces (crypto) collectibles that serve as a tool to personalize, repurpose, and take back the ownership of one’s case. By the use of novel technology, the centuries old idea of ‘collection’ morphs into a new form of possession. Consequently when it comes to the act of commodification, the same technology brings in, as its byproduct, the complete riddance of any central authority in regard to monetary transactions. The decentralized currency used allows the evasion of such authorities, be it banks or the state, while granting the individual with the sole accountability. Additionally RMC recognizes the isolation and exclusion imposed by bureaucratic engagements therefore while reacquiring one’s individual case, RMC also supports a communal digital platform to bring back a kind of solidarity in. Hence the decentralized community or autonomous organization becomes one of the dominant concepts that characterize RMC.

The theory part of RMC tries to exhibit the arsenal of problematic characteristics inherent to this ubiquitous structure and its intertwined affairs with central entities such as nation states or corporations. In that sense the first chapter of the paper represents an analysis of the status quo. Furthermore, the second chapter was introduced as a theoretical groundwork in the social discourse for practical tools to be built atop. In its demeanor the second chapter acts like a showcase of rhizomatic circumvention. The paper can be read here.

The way RMC talks about the aforementioned issues is through code. As an open-sourced project itself, when it came to making a selection RMC by default opted for the ones which are open sourced and peer-to-peer. Accessibility, sustainability, sovereignty, and transparency were aspects that were given the most importance to as RMC conceptually embraces these very attributes in as well. Additionally, RMC uses technologies that in no way rely on a central authority of any kind, as well as working with file formats that are easy for humans to read and write, easy for machines to parse and generate.

RMC is comprised of two decentralized applications (dApps): one that is developed for mobile, another one that is developed for the web. The mobile dApp is the ‘personal’. The web dApp is the ‘communal’. The variety when it comes to platforms does in no way force confined or exclusive applications, on the contrary, these two dApps are deeply interwoven.

Conceptually at its core, RMC builds itself on rudimentary ontological phenomena of time and space. These two concepts reveal themselves as the first two initial interactions for the administered to commit to so as to allow further input to be laid upon. Firstly, the administered is meant to initiate the case minting procedure by pressing a button interface on mobile. This interaction thereon allows the tracking of total duration of the actual bureaucratic experience and the total distance travelled for it until the point where the administered eventually commits to minting. 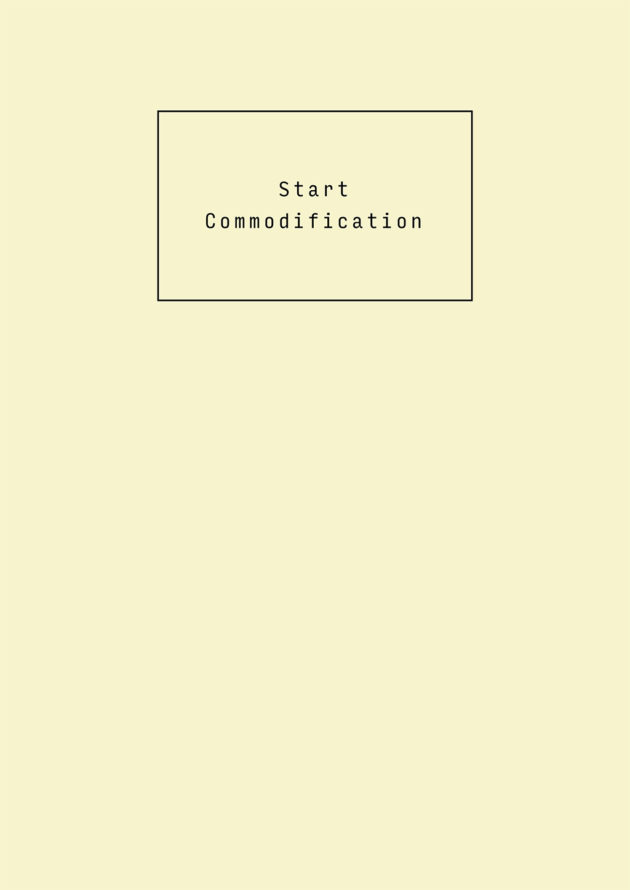 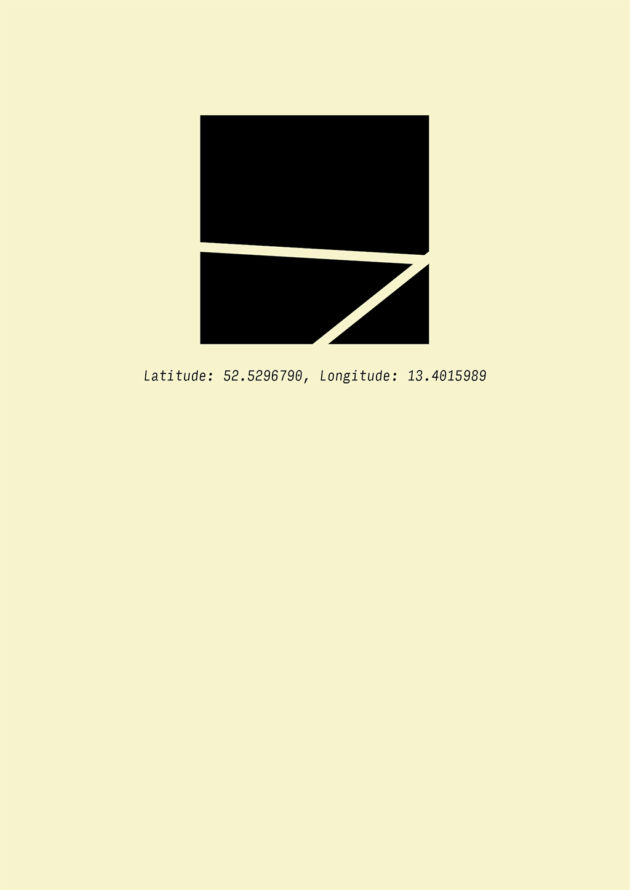 At the end of the bureaucratic experience the administered is presented with questions distributed in three focused sets. These questions reside in and are programmatically filtered from the Autonomous Question Pool (AQP). As the administered answers the questions, their rating and scores are collected as constituents of evaluative Location Based Level of Bureaucracy Assessment (LOBALOBA) tool. Here, the LOBALOBA score comprises of the administered’s rating inputs on a scale of 1 to 5 per question. 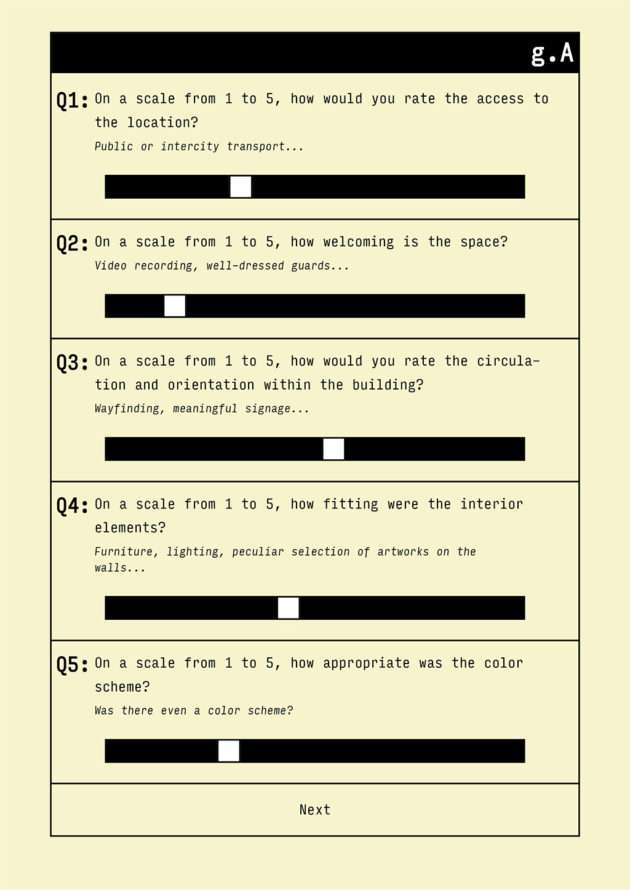 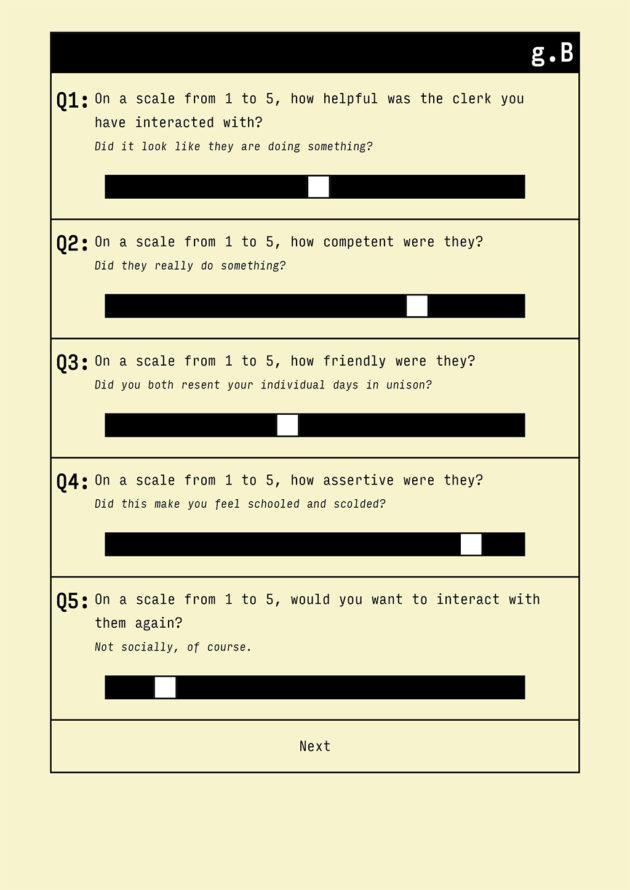 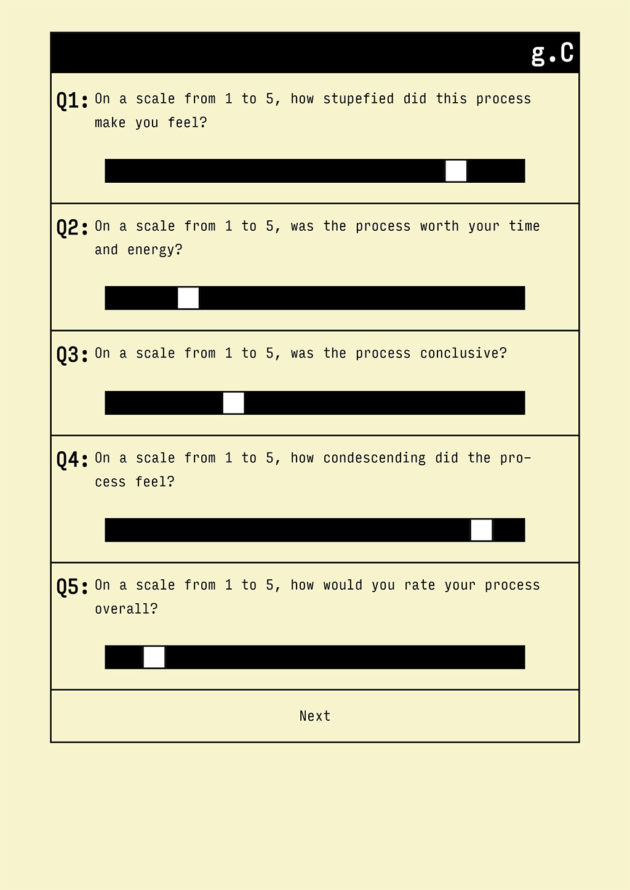 Finally, the minting is possible after the administered has answered all the questions, and input a name and description for their individual case. At this point, the data collection for total duration and total distance comes to completion and takes part in the graphical conversion process of the case along with the LOBALOBA score. The act of commodification is strictly only possible within a pre-defined periphery of a bureaucratic institution. In order to be able to finally mint their case, the administered is restricted in the geolocations of such institutions, listed in the Autonomous Location Pool (ALP), surrounded by a circle of 100meters in diameter around their center. 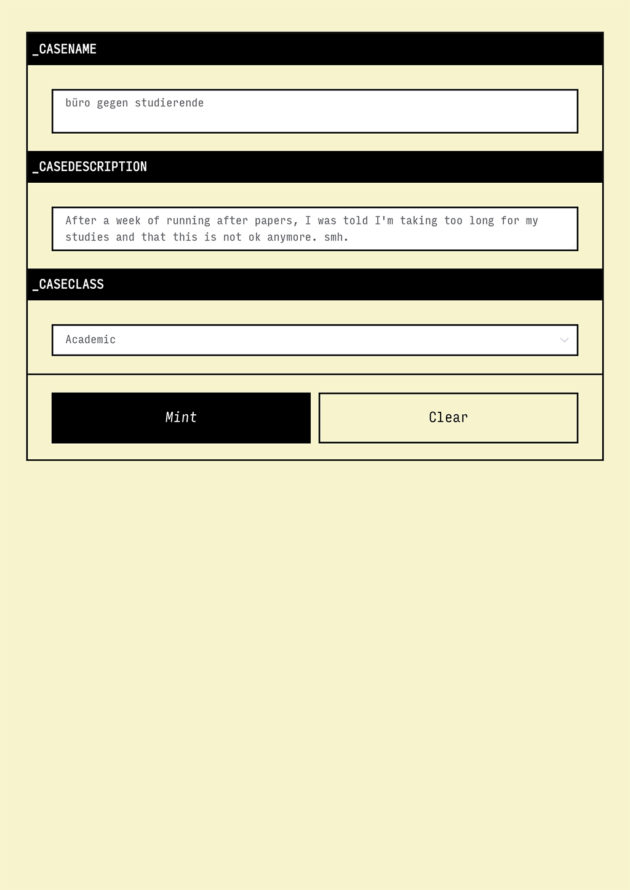 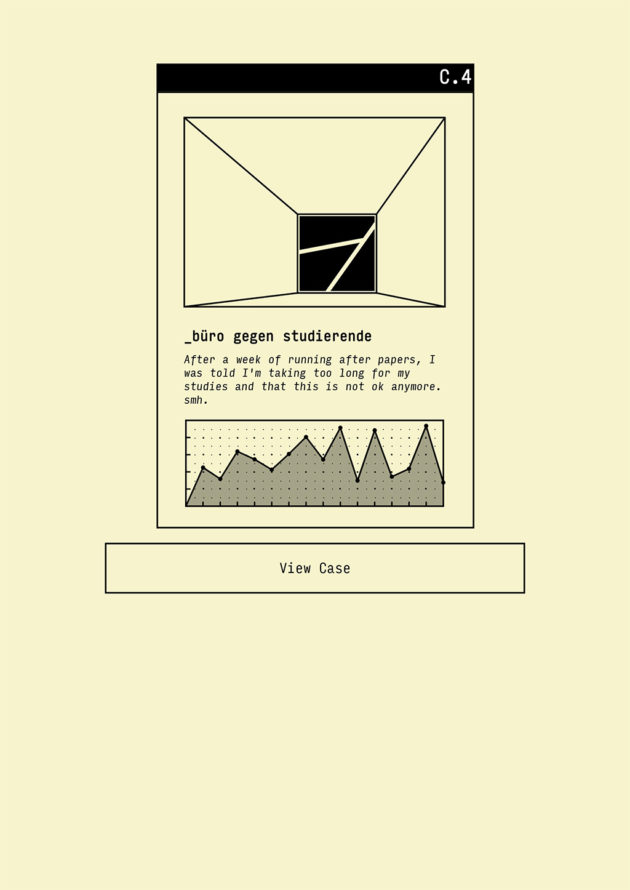 Eventually, minting of a case leads to its commodification, thus to its placement on the digital marketplace on the web, where other individuals are also then able to view and purchase it. The digital marketplace permits the administered to transact cases as cryptocollectibles. On this marketplace the users are able to see already minted cases as Non-Fungible Case collectibles. Therefore it is the realm where the bureaucratic commodification takes full effect as blockchain transactions in cryptocurrency (ETH) outlined by the smart contract which, as a matter of course, deals also with ownership.

The digital marketplace gives room to two components that cryptographically employ the concepts of ‘community’ and ‘individuality’ while constantly checking in with the physical space.

The first one of those decentralized components is the Autonomous Question Pool (AQP) which is essentially a publicly curated question pool. The evaluative questions that the administered is presented with are the product of this pool. As mentioned in the user scenario these questions within AQP are catergorized in 3 different sets. The first set of questions relates to the physical space(s) and their spatial qualities, the second set is concerned with the clerk(s) that the ‘administered’ has interacted with, and the last one deals with the individual themselves. AQP is, as well, managed through a smart contract to provide fairness and immutability through the decentralized infrastructure. Besides functioning like a community run wall of aphorisms, this immutable platform allows participants to input their own question as they please while giving them the opportunity to vote on previously input ones aiming to favor them in the filtering process. Respectively, whether they may be about the space, the clerk, or the individual, the five questions per section will be programmatically chosen and filtered to become the current LOBALOBA questions for the evaluation of the administered‘s cases. Hence, this autonomy in the organization is intended to establish a thorough sense of interactive and participative community reinforcing the decentralized aspect as well as permitting an organic development instead of an imposed one on the administered. 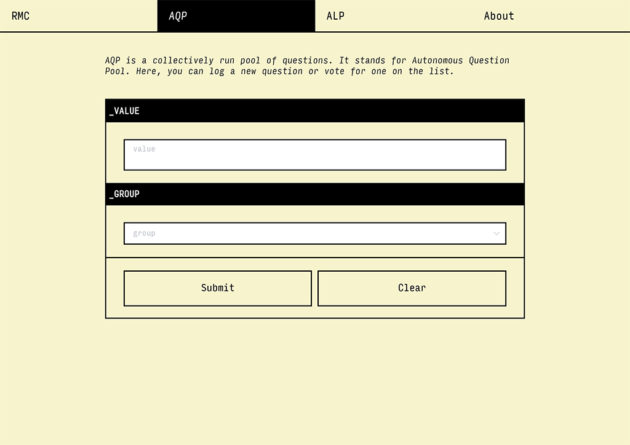 The second decentralized component that plays a fundamental role in RMC is the Autonomous Location Pool (ALP). As mentioned in the part about the spatial constraint when minting a case, the ‘administered is bound to a physical location and its periphery. In that regard, the geolocations of bureaucratic institutions are collected and managed by the community in the ALP. Just like the AQP, ALP’s behavior is also programmatically dictated by a smart contract. Between the two, the core functionality and ideas pointing to a community run platform are mutual. On the other hand, the main difference between the AQP and ALP is that the submitted locations need to be validated by the community in order for them to be registered as legitimate locations to employ the aforementioned spatial constraint as these inputs are less arbitrary in the sense that they deal with existing physical locations. If their validation checks out, the numerical values of latitude and longitude are then able to apply the peripheral constraint. 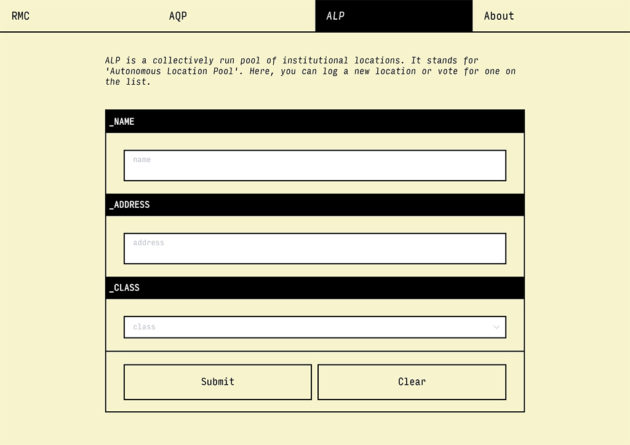 RMC’s code is completely open for anyone who wants to view, or better, participate. The source code for RMC can be found here. 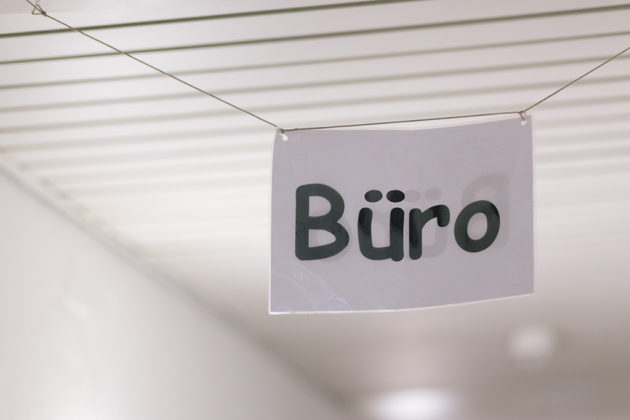 To revive, transmit, emphasize a few of the aspects that the theory part of RMC deals with such as performativity and/or materiality of bureaucracy, the work has been introduced through a performance. 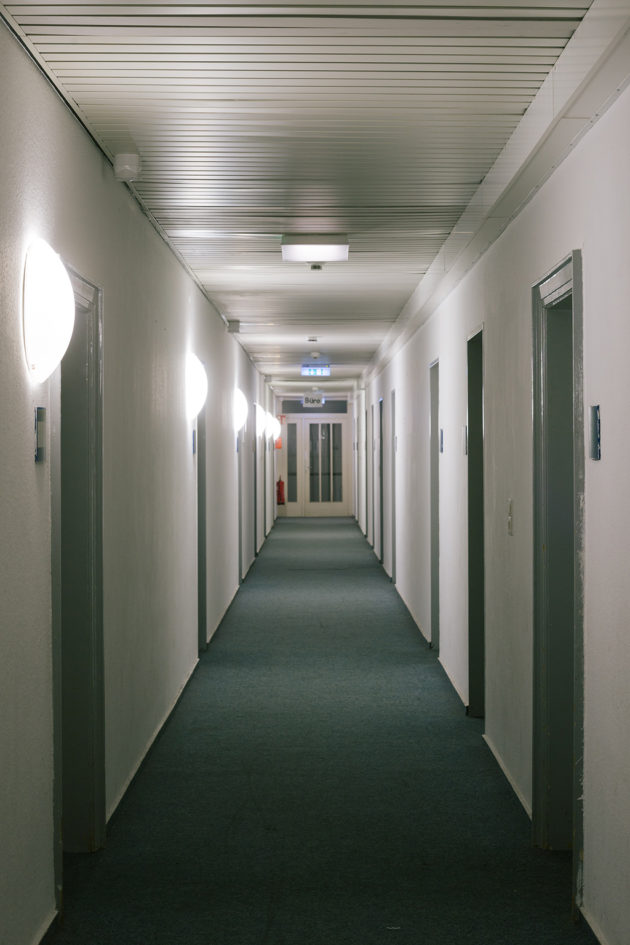 This event took place at an abandoned management building of a hospital in HB. Along a long hallway, the location exposed a perpetuation of alike orthogonal spaces, of which three were occupied by three bureaucrats. 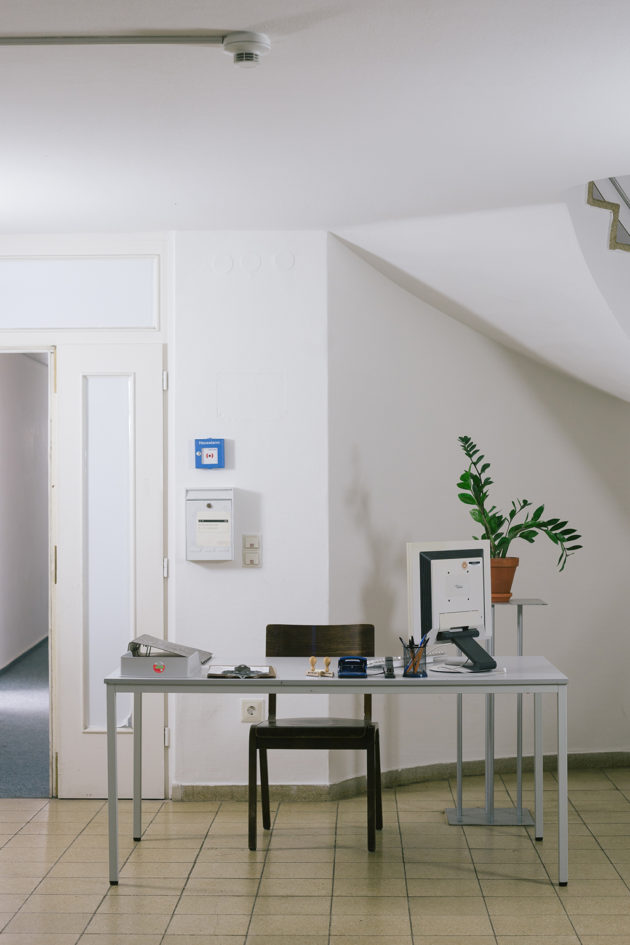 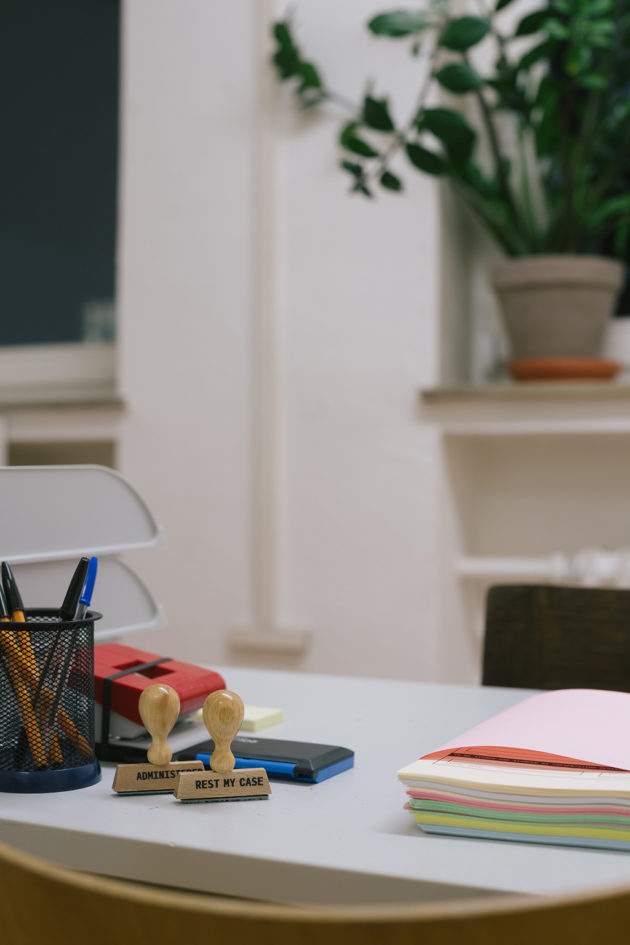 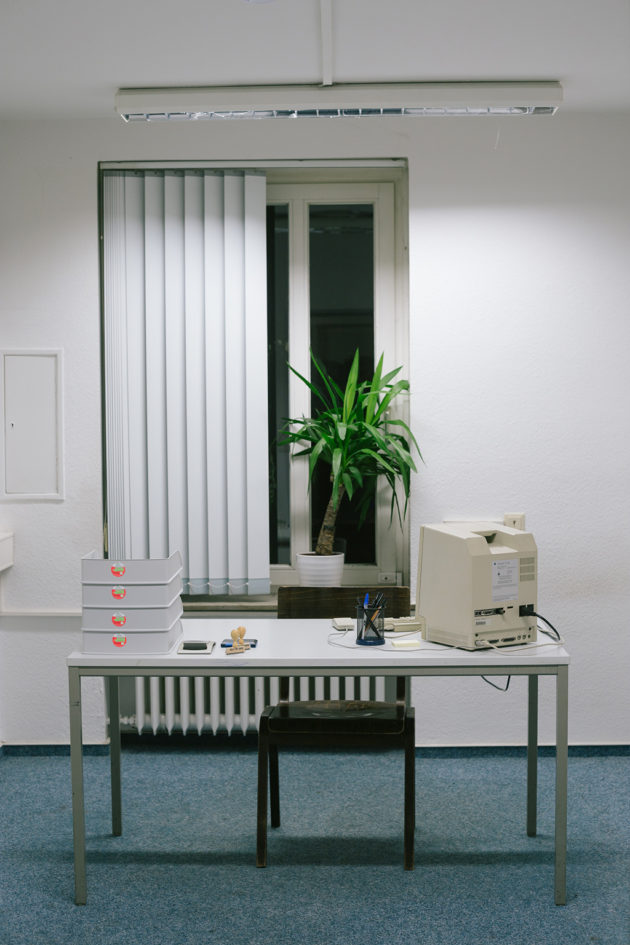 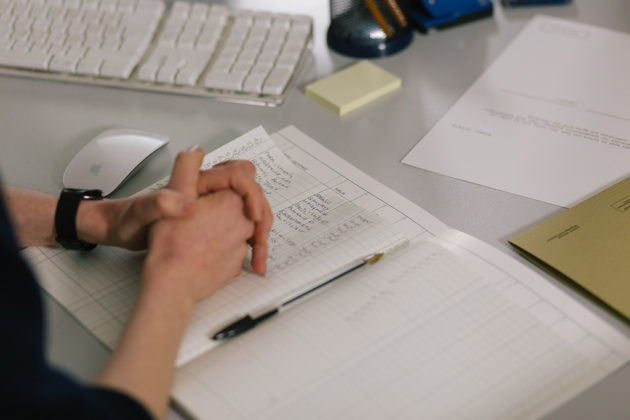 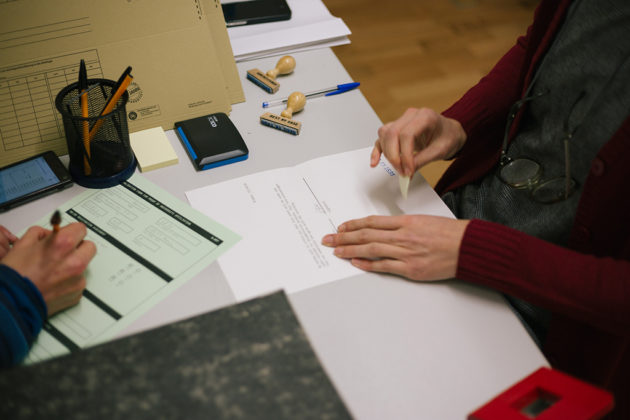 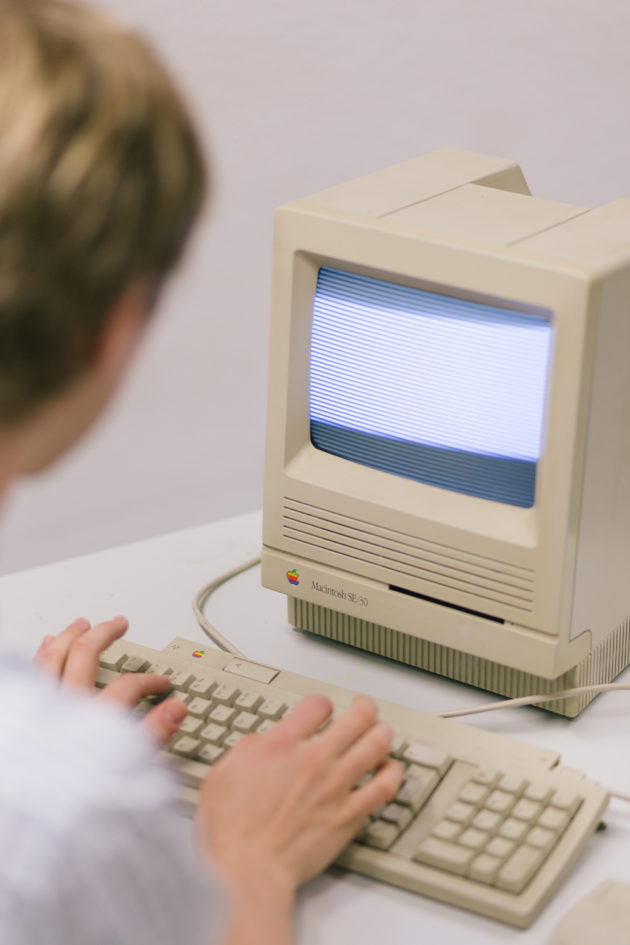 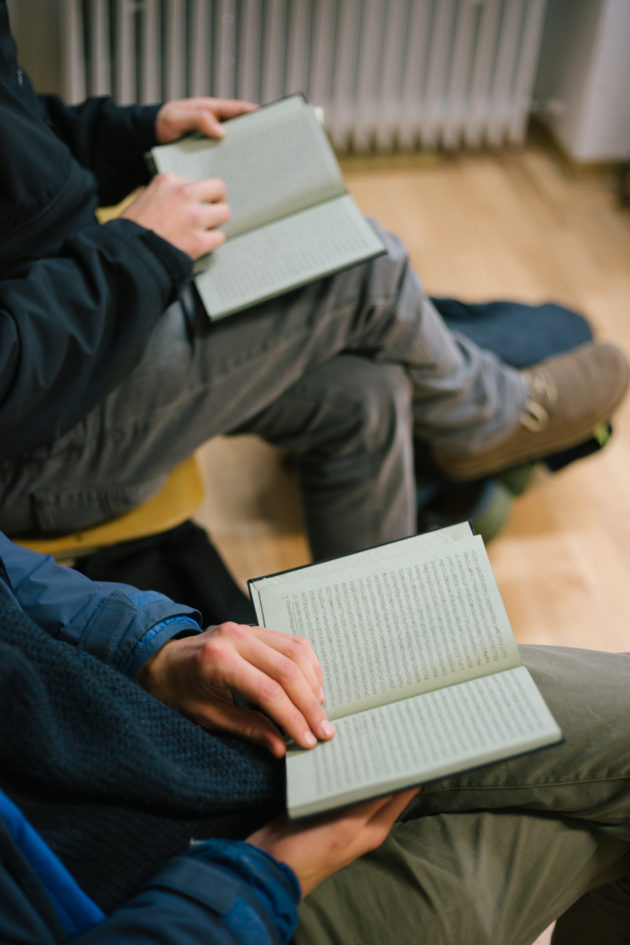