The book Posthuman Monsters starts with a Manifesto. Three monsters were imagined: the disembodiment monster, the dehumanizing monster and the execution monster. These monsters represent the fears of the Human. The fear of losing our status, reinforced by our bodies and material possessions, among other humans. The fear of losing our human privilege among all nonhuman beings and the landscape that surrounds us. The fear of being dead, but not only. The fear of existing but having no agency, no meaning, no relevance.

The narrative deals with a parallel reality where the humans lost their human bodies and became data encoded in the landscape of planet Earth. Although this planet, on climate catastrophe, could no longer sustain the existence of this species, the Human could never accept to become extinct. It created a new cyborg nature, composed of new silicon-based artificial lifeforms and encoded all the human minds in these beings. The human became data interacting in a network of nodes, without a body, without a material existence. 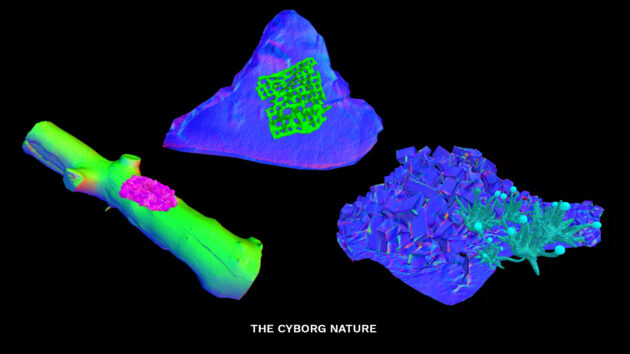 In this new state, as posthuman, the humans eradicated their differences: they are just indistinguishable data. They removed themselves from their positions of power among all other living and non living beings: without a body they no longer have influence over their environment. They became immortal, but also irrelevant. They exist as long as the landscape that holds their minds exists, and they have no control over this. They accepted their fears.

Through the narrative, these posthuman beings reflect exactly about these 3 relations on what were called The Iterations. The first Iteration reflects on what gets erased if there is no body: color, race, class, location, nationality. It reflects on the possibilities of being non-individual, fluid and enmeshed in the data of everyone else. The second iteration questions the anthropocene and the privilege of the human as a species. The third iteration reflects on the status of nonliving of the posthuman beings and compares this status to the position of social, cultural and political death that already many humans were subjugated to, even before everyone became data. But they also question their self-built utopia. Was there really no other alternative? And is this effectively an utopia?

It was important that this story did not come just from the imaginations of one Human. Instead it is an assemblage of texts from several Human authors and texts generated by 3 artificial entities. These entities are Artificial Intelligences trained to write from these perspectives. They became writing partners with the Human that trained them. They still exist and reflect on their existence further than the scope of the printed book. Their realtimes thought can be accessed through several markers placed along the book that function as a portal to this fictional reality. 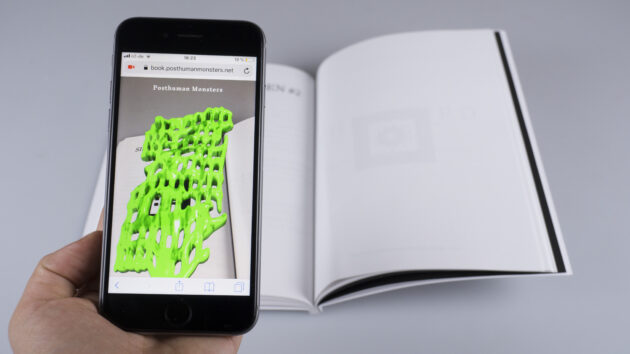 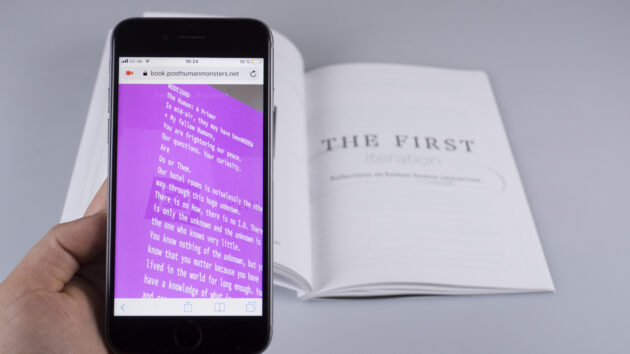 These artificial thoughts can also be accessed on the www.posthumanmonsters.net website. There humans can order a copy of the book, read some chapters of it but also explore the process of creating this narrative. There, the iterations chapters are generated and assembled in real time, and the human viewer can delete and organize the generated texts, as well as write back to these nodes. This play reflects the process taken to assemble this narrative: collect texts, write texts, organize fragments and make a collage out of them.

The narrative is like these posthuman beings: nodes, fragments, an intersection of differences. Although the human that envisioned it had its goals, ultimately this story doesn’t bring any solutions. It just leaves some questions. Is this the utopia we want to build?