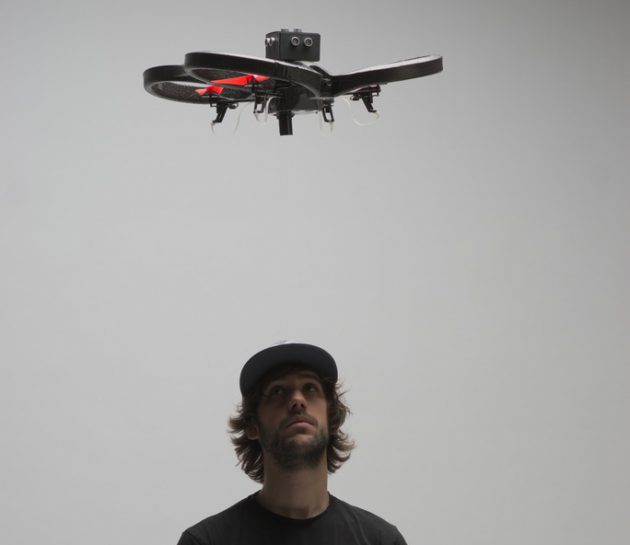 Inspired by the ancient myth of the Damocles Sword, the Damocles Drone is a hacked consumer drone, that follows and hovers autonomously right above a person’s head. Similar to the sword in the Damocles myth, the drone creates a constant threat of falling onto the person underneath caused by a variety of unpredictable technological failures.

Drones are the holy grail of every recent automation utopia. Ranging from all sorts of delivery drones (even for pizza) to farming drones and even organ transplant drones, the industry seems to not run out of ideas and applications in which to use them.
At the same time people try to find new ways to stop those drones from flying around without any restriction: Apart from general law making, China is testing signal jammer bazookas to shoot drones out of the sky and the Netherlands are training eagles specifically to take down drones mid-flight.
This mismatch between enforced economic boom and on the other hand rigorously enforced countermeasures keeps intensifying and served for this project as a base for further inspiration.

The damocles drone references the greek myth of the Sword of Damocles, which is talking about the ever present peril of people in power.
Since then the term of the sword of damocles has been applied not only to people in power, but as a general threatening misfortune. Most famously John F. Kennedy refered to the myth during the cold war, stating that “Every man, woman and child lives under a nuclear sword of Damocles”.

The idea behind the damocles drone was to program a drone in such a way that it would create a prolonged feeling of impending doom by contraposing our seemingly unrestricted trust in technology and its advancements to the ever present possibility of sudden technological failure.
The drone will lift off from the ground to a certain height and start looking for tracking targets by flying autonomously through the room. Once a target is recognized, the drone locks onto it, and follows it around, directly over the person’s head. 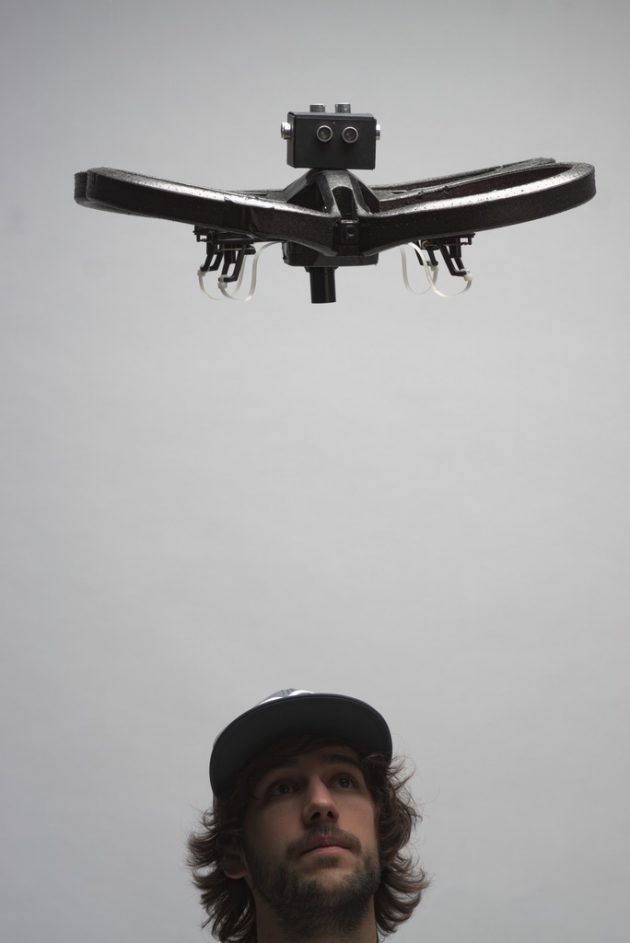 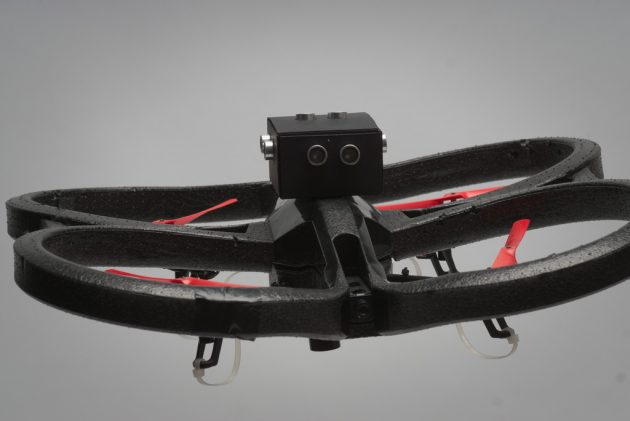 The Damocles Drone at its technological core consists of a consumer drone whose functionality has been extended to behave autonomously and perform pedestrian tracking.
To realise the tracking, a server pc connects to the drone via wifi, where the live videostream of the drone is analyzed within the programming environment vvvv. The videostream gets processed by different computer vision algorithms before an algorithm within vvvv accordingly computes control signals and sends them back to the drone in order to keep the drone hovering over the targeted person.
A total of six range sensors are used to achieve obstacle avoidance and alitude estimation during the flight. Those values are being processed by an arduino and sent to the server pc together with the live video. 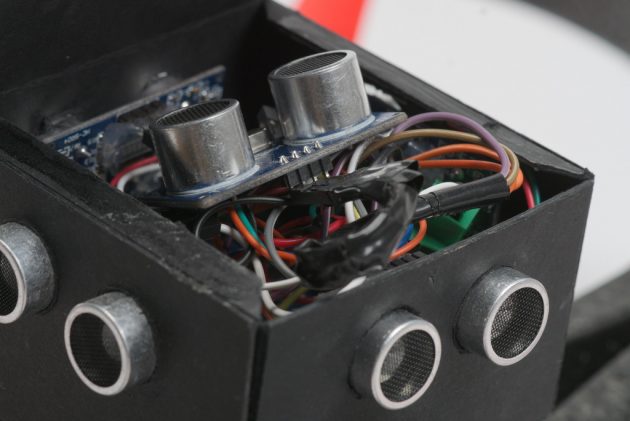 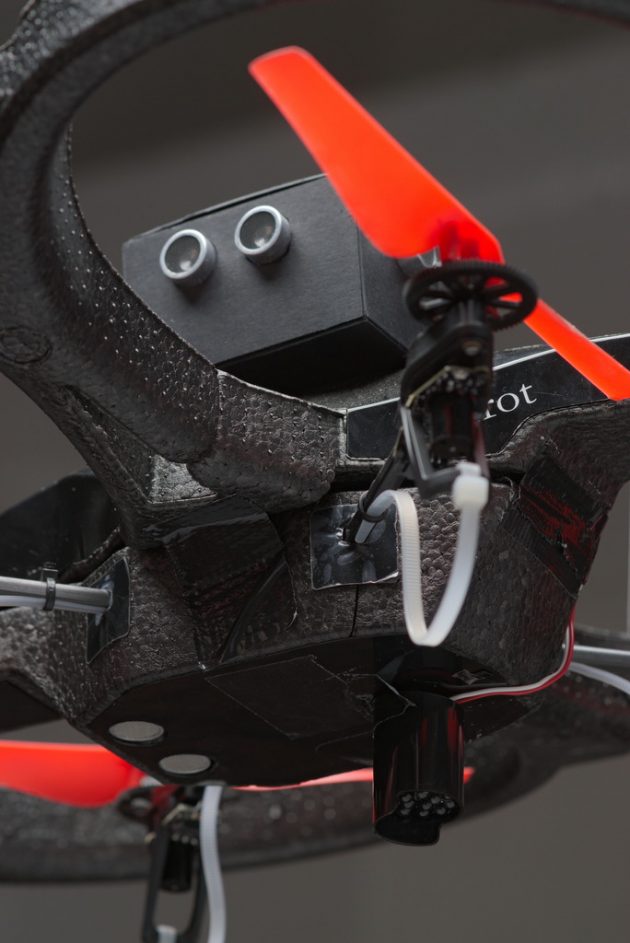 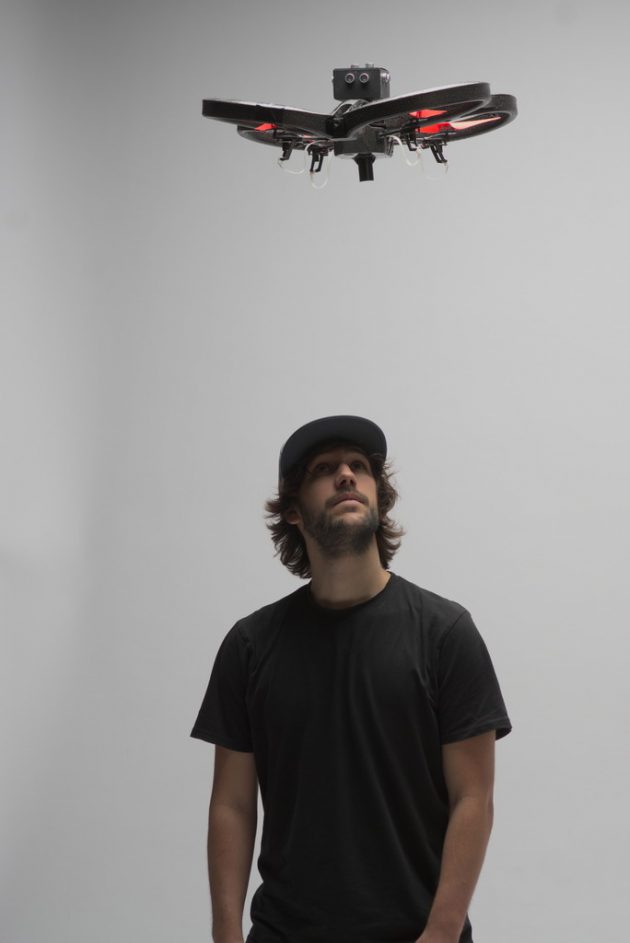