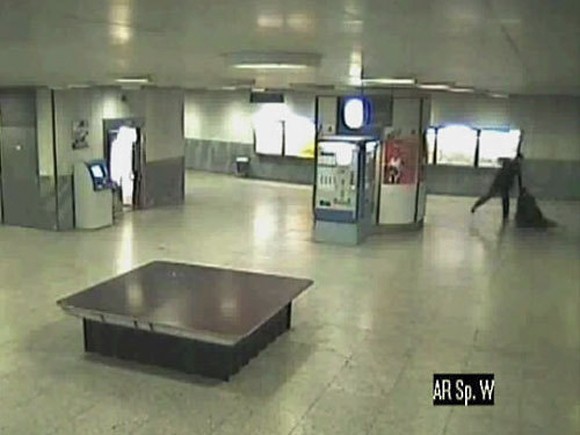 Pictures reign. Images – in contrast to words – prevail in our current living conditions. This thesis focuses especially on pictures acquired by means of video surveillance cameras, also called CCTV (Closed Circuit Television). Due to the process of their creation and their swift possibilities of “enhancement” and “manipulation”, questions of authenticity, objectivity and truthfulness arise. However, CCTV images are considered to be “the perfect witness”. Their current authority status is under-reflected in many respects. How is it that CCTV images are unquestionably trusted and silently granted the power to be considered objective, to testify like a witness and claim to be truthful?

My research encompasses different stages in the life cycle of CCTV and its images, such as historical incidents related to the advent of mechanical vision and image recording, which helped pave the way for CCTV and the later rise to its current extent of use. Moreover, examples of current employment, reactions, and research concerning video surveillance are given, which highlight also the problem of a general overproduction of images and data. Therefore, most data is only manageable by computers and digital archives, so-called databases. The point I am mostly interested in is the actual “truth production” connected to the probative dimension of those images. By introducing different examples, the veiled mechanisms that assign those pictures their power and assumed value as evidence is illuminated.

The precarious status of CCTV images is considered more thoroughly by contrasting two poles of their usage, on the one hand the task of providing a rich body of evidence for criminal proceedings and on the other hand the problem of displaying mere “emptiness” and insignificance for people outside a certain context. My main argument and attempt of classification for CCTV images is that they can be perceived to be boring on different levels. The rather theoretical concept and metaphor of boredom is interwoven throughout the different chapters and looked at in depth at the end.