Tabulous is a modern text editor that allows you to write guitar tabs using an extended markdown language.
If you play the guitar or bass, you know that it is very common not to use a notation using traditional musical notes to write songs (at least if you are not playing classical guitar), but to instead use tablature, or in short: tabs. Tabs don’t reveal the actual note that is played, but show how it is played, while notes show the note that is played but not how. Writing tabs is very common in a band or singer-songwriter situation where you create your own songs. 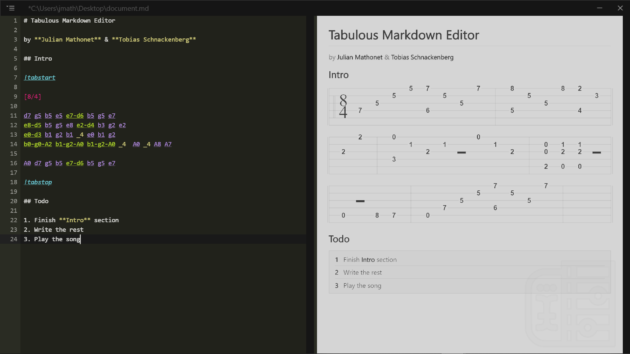 The problem with tabs is that there is not a good way to actually write them down. Many people use pen and paper, which gets messy rather quickly. Others create them using characters of a monospace font and a text editor. Those are called ‘ASCII tabs’, but they are cumbersome to write initially and difficult to edit afterwards. Another way of creating tabs is to use professional software, which often has many more functionality than is actually needed — and is often too hard to use as a result.

Within this project we looked into easier methods of creating tabs and stumbled onto the markdown language. Markdown is a syntax used in many text editors that allows structuring and formatting texts quickly and intuitively. We began to design a language for creating tabs that is based on markdown. 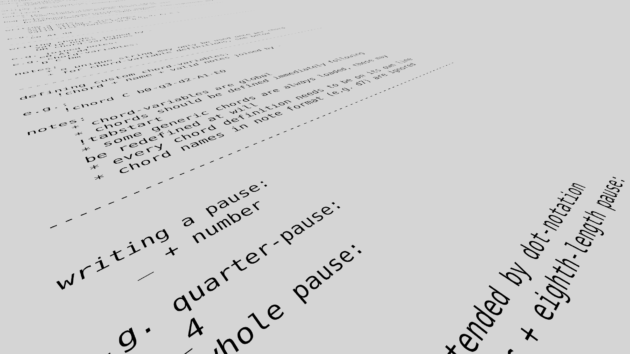 In the end we created a text editor that supports markdown and the additions that we made to the language to support tabs. It was always important that the outcome is easy, pretty and fun to use. Creating tabs should no longer be a hassle, but instead be a fun activity that should not stand between you and your music.