Negotiation is an approach to redesign traditional dueling weapons. The person holding the gun has to overcome not only the moral values but also physical pain because of an additional mechanism that produces an electric shock. The project questions the practice of duelling as well as the design of weapons in general.

“Duel​, a pre-arranged, private fight between two persons, to settle a point of honour or personal quarrel.” (Wikipedia)

Up until the 19th century it was a common to carry out a dispute with weapons. Whoever was the better gunman and faster shooter was right and his opponent dead in most cases. This type of settlement was subject to strict rules. Whoever had a disagreement with someone else, or got offended by them, could not just go forth and kill the other person. Everyone had to adhere to the guidelines, otherwise killing a person was considered murder. The duel rules, on the other hands, legitimated the intention to kill, so that men of honor could maintain or restore their reputation.

The Code Duello is one of such rulesets consisting of 25 rules which duellers had to comply with. These rules determine which weapons my be used, how one must behave during the duel and that each opponent must have a second. These had the function to testify that the stipulations for the duel were met.

First and foremost the duel had the function to restore personal honor. Shooting someone was never the main motive. Whoever did not appear to a duel, lost their reputation as a man of honor and was rejected by society. 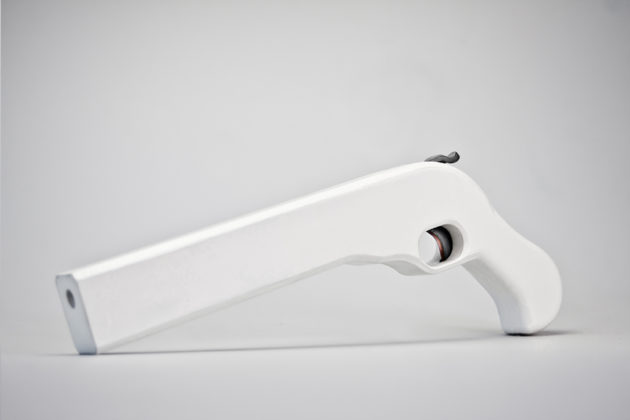 Since the 19th century duelling is prohibited. The dueling pistols “Negotiation” offer the opportunity to fight disagreements without mortally hurting anyone again. At present, arguments are often not properly resolved. Many do not talk to each other anymore, swallow the resulting frustration and act as if nothing had happened. Then they just go on as before, without any changes to the status quo. And that, although in today’s social media-driven society, reputation seems as important as it did a few hundred years ago. Negotiation might not be enough to restore someone’s honor. Nevertheless, it offers the opportunity to release the accumulated frustration and to reflect the situation.

The ​mechanism​ of the weapon is based on a dart gun, which shoots foam darts with the help of air pressure and the compression of a spring. In addition, a taser is installed, which consists of a power supply, an emitter and a high-voltage transformer. 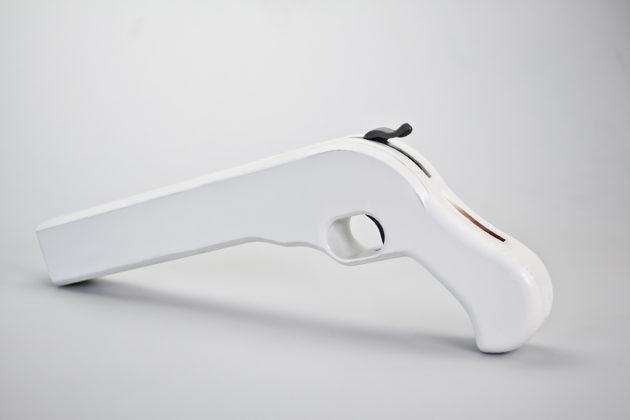 If the trigger is actuated after the gun has been loaded, the person letting off the shot gets a noticeable but not fatal electric shock. The english term negotiation means has two meanings and can be translated as two different words: ​argument​ and ​overcoming​. This ambiguity should be reflected in the function of the gun. Whoever wants to carry out a dispute with a firearm first has to consider the consequences to really perform this act. The electrical parts are inside the gun, and are connected to the trigger and the hammer. Electricity are conducted by small copper components attached to the mechanical parts. 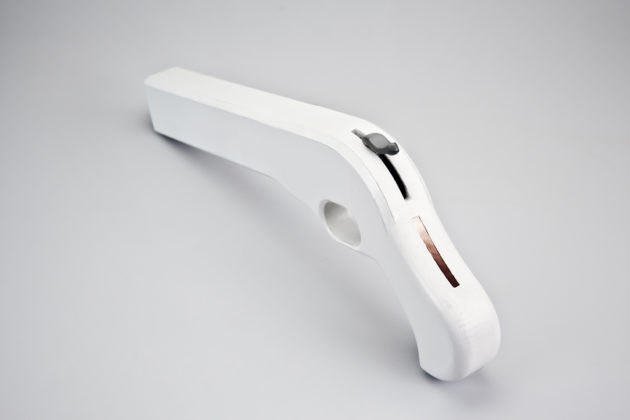 The design is inspired by the simple, minimalistic and often white appearance of Dieter Rams’ Braun products from the 1970s. In terms of shape, size and weight, the object is based on traditional dueling pistols. Because of the sleek design, the objects seem artificial as if they came from a sci-fi or cartoon world.

During the design phase, in addition to altering the dueling function, the design of weapons in general was also dealt with: From the classic craft of constructing hunting weapons up to the technical production in the arms industry. The two objects are meant to be a form of criticism of whether and why designers work for that industry. The components are made of 3D printed white plastic. The handle consists of two shells, which are connected with the barrel by a plug mechanism. Within the technology is not visible. Only some parts of the mechanical components, such as trigger and hammer can be seen in the outer design and meet the usual functions for a firearm. The plastic material was deliberately chosen. This creates a clear contrast to the conventional materials traditional duell pistols were made of, which mainly consisted of wood and metal. The 3D printed plastic also gives the impression of something new and modern. At the same time, however, the material also conveys a certain unworthiness or the appearance of poor quality, which seems to fit well with the mentality of today’s throwaway society. 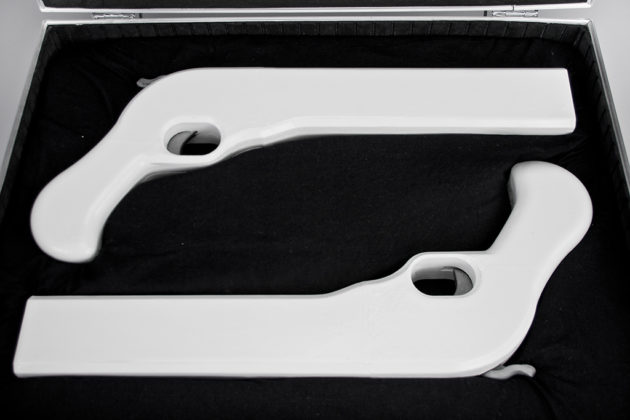