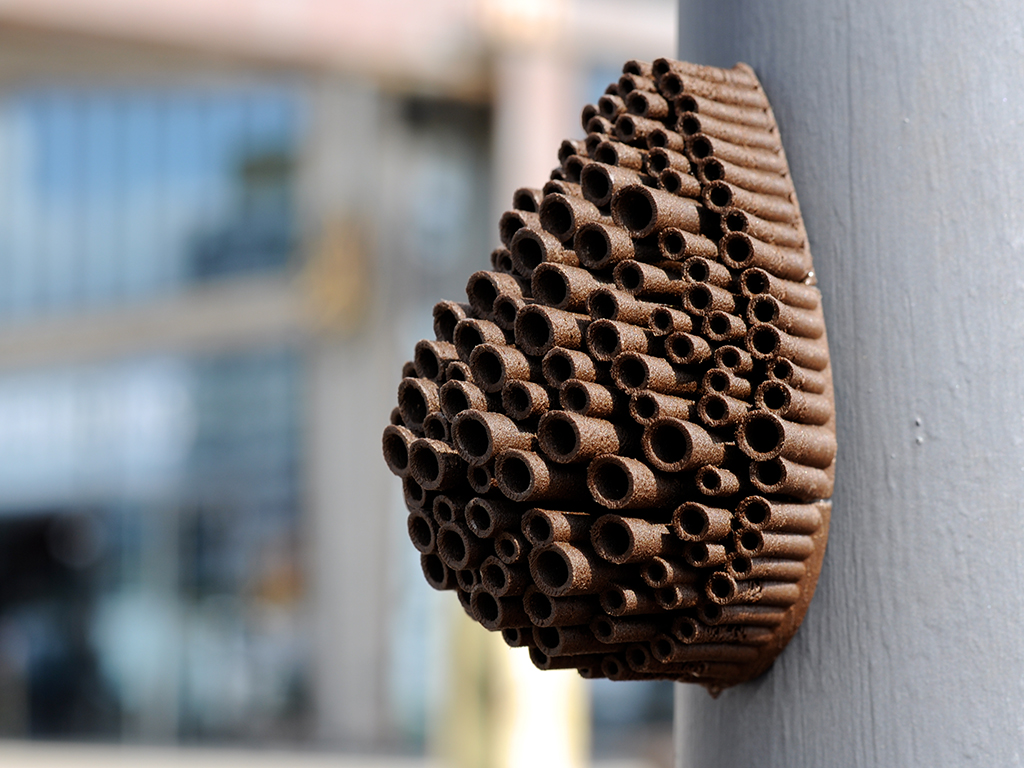 ‘Municipal Bees’ investigates the relation of man, nature and technology and tries to reintegrate nature into our everyday lives by inviting a part of untamed nature, the wild bee, into our urban habitats. By combining and experimenting with strategies of both the technological and the biological realm a concept of urban nesting interventions for wild bees was developed that is meant to act as a mediator between the wild and the manmade world. Based on preceding research on the growing separation of man and nature as well as the wild bees’ specific needs, the resulting ‘Hive Bombs’-project is an urban Wild Bee Guerilla that aims at the attraction of noncompliant behavior to motivate people to partake and save our bees.

Both man and nature are confronted with different challenges that can be perceived as direct consequences of the growing separation between nature and the human habitat. Having evolved in nature, our minds and bodies struggle with the lack thereof in our everyday lives. Meanwhile, rapid changes in our landscapes due to ever-growing cities and increased agriculture have put many natural habitats and the creatures living in them at risk. Wild bees, for example, depend on native flowering plants and small scale structures to survive, which they often cannot find easily anymore. Thus, the number of the often-underestimated wild bees is rapidly decreasing – and if we lose the bees, we lose our planet’s most important pollinators. Fortunately, it is not too late to turn the tide. If we merge the needs of technology and biology and start to include nature into our urban planning, we can create hybrid habitats that sustain all sorts of life.

The intention of this thesis was to develop urban wild bee nesting interventions symbolizing a first step towards this hybrid future. The focus in the design process of the nesting interventions therefore was on the attempt to fuse natural and technological methods in the function, fabrication and form finding of the final outcome. To gain a better understanding, the research on these three fields was accompanied by three practical experiments each.

The first set of experiments aimed at clarifying the functional requirements of the intended urban nesting interventions. Experiment #1 thus was to build and mount a simple nesting aid consisting of bamboo tubes on an inner-city balcony, testing whether wild bees could successfully be attracted and hosted in such urban settings. Since wild bees depend on native flowering plants to collect pollen for their offspring, homemade Seed Bombs with bee-friendly flower seeds were tested in Experiment #2. Experiment #3 addresses the issue of a possible lack of nest building materials by offering the bees loam and colorful clay for their nest closings. 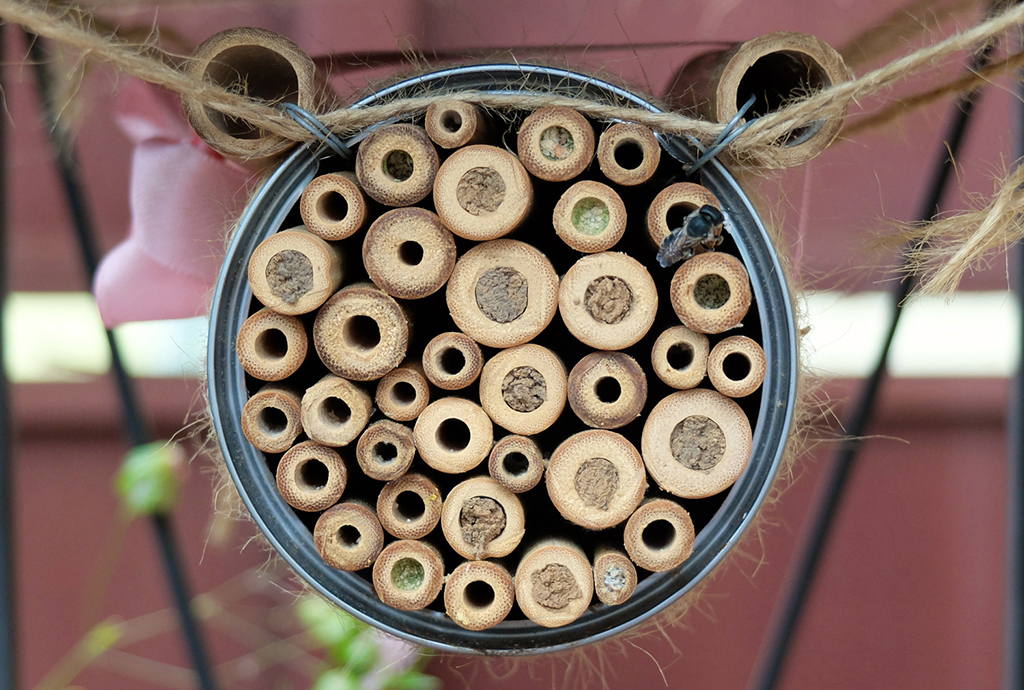 The second group of experiments tries to identify a suitable fabrication method and material for the planned nesting intervention. Inspired by the way nature creates form by gradually growing material, 3D printing was chosen. Since the use of materials harmful to nature would be hypocritical, environmentally friendly, 3D-printable materials were researched in the next step. Experiment #4 therefore investigates the suitability of homemade cornstarch-based bioplastic and Experiment #5 tries to recreate a chitin-based material described by the MIT Mediated Matter research group. Seeing that both of these materials did not fulfill the requirements for this project, Experiment #6 compares the properties of regular PLA (Polylactic Acid), commonly used in 3D printing, and a wood-blended PLA. The properties of the printed wood PLA samples seemed appropriate for the final nesting aids, so it was chosen as the material to work with in the end. 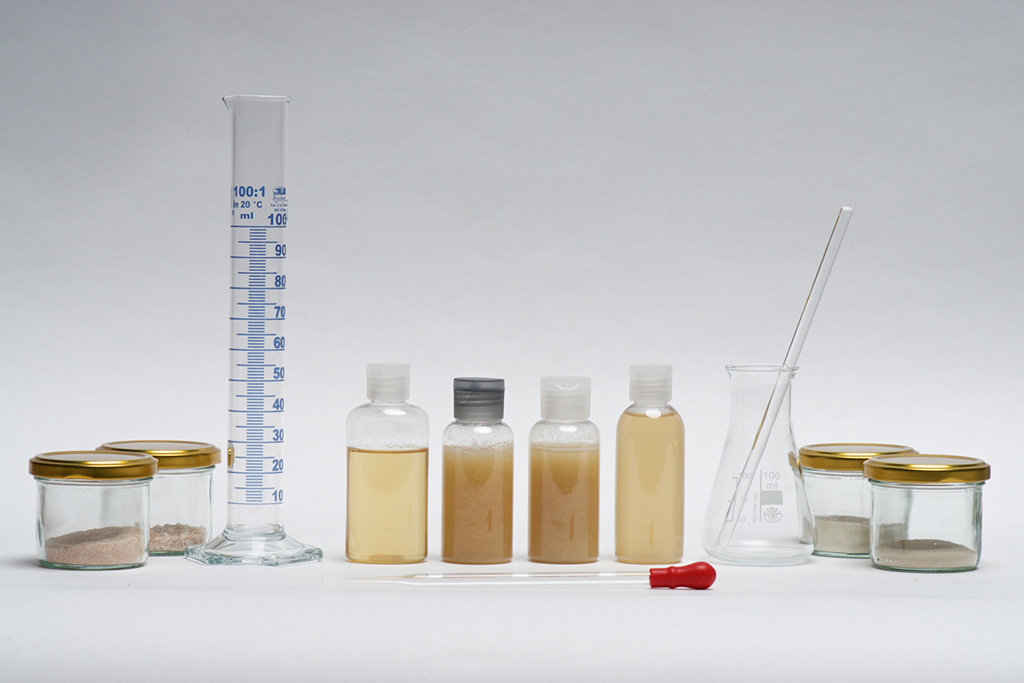 The last group of experiments explores the possibilities of a nature-inspired form-finding approach in the generation of the nesting interventions. The aim was to find some distance from the human perspective in the design process, in contrary to common insect ‘hotels’ in the shape of manmade symbols. Therefore, natural growth processes and the role of DNA in living beings were researched to inspire a form-finding process that keeps the designer in control of the elements, but not the shape of the outcome. Experiment #7 thus tried to imitate natural growth using Thinking Particles in Cinema 4D. Experiment #8 explored the idea of a ‘digital DNA’ by creating an algorithm in Rhinoceros’ Grasshopper. Just like DNA can be described as a set of instructions on how to create a body, this algorithm constitutes instructions for the generation of a shape according to certain rules. Experiment #9 refines this process by adding organic subdivision and circle packing techniques to the algorithm, mimicking nature’s tendency to efficiently use space and material. With a few adjustments, this final algorithm was suitable to generate the nesting interventions in the end.

The result of the preceding research and experiments is a set of artifacts, ’Hive Bombs’, that are meant to enable an urban Wild Bee Guerilla. Hive Bombs are urban nesting interventions that try to sensitize people to the issues of wild bees and the separation of nature and the human habitat by aiming at their sense of delight in a non-violent resistance and exploitation of regulations while helping untamed nature to gain ground in cities. As in Guerilla Gardening, Wild Bee Guerilla activities are meant to happen in places that the person who deploys a Hive Bomb does not have the legal rights to use. However, German law prohibits the removal of the nest of a wild bee. This creates a contradictory situation in which an illegally placed object becomes protected by law as soon as a wild bee selects it as its residence.

The focus of the Hive Bomb project is on the actual Hive Bomb artifacts, small nesting interventions that were generated in Grasshopper and 3D printed using wood PLA. Three versions of Hive Bombs were developed: two for universal use (one to attach to vertical surfaces via magnets, one to throw) and special Hive Bombs that are custom-built for specific locations in cities, such as metallic posts or traffic signs.

The Hive Bomb Kit is a proposed product that is meant as a Wild Bee Guerilla starter set. It includes two universal Hive Bombs, an information leaflet, a bag of Seed Bombs, a custom-made Seed Shaker filled with bee-friendly flower seeds, tags informing about the German law that can be attached to the Hive Bombs and some stickers. The Kit as well as the suggestion to request special Hive Bombs is presented on the Hive Bomb Website, which also offers general information about wild bees and the Hive Bomb project. 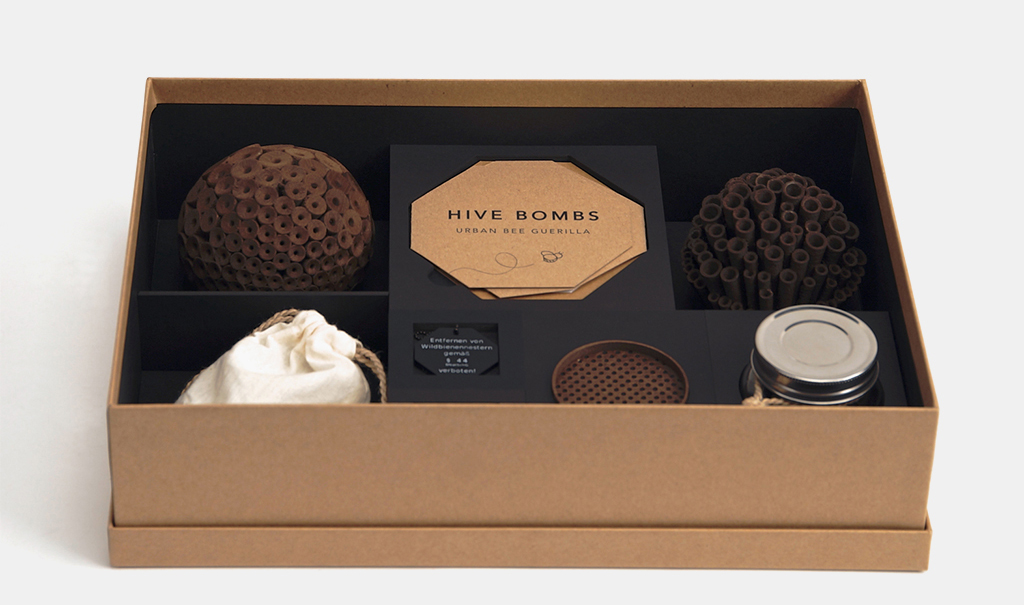 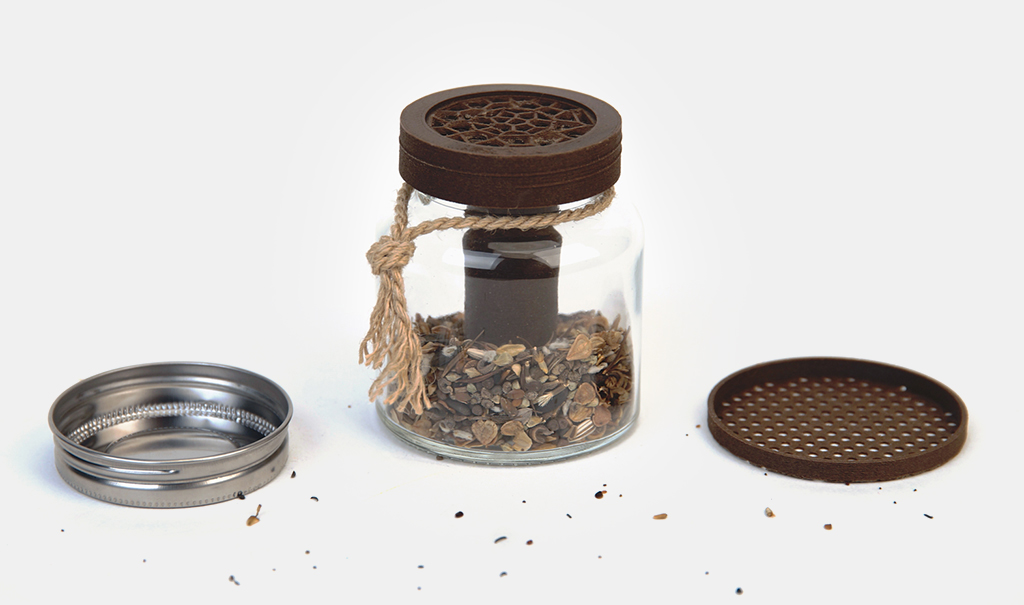 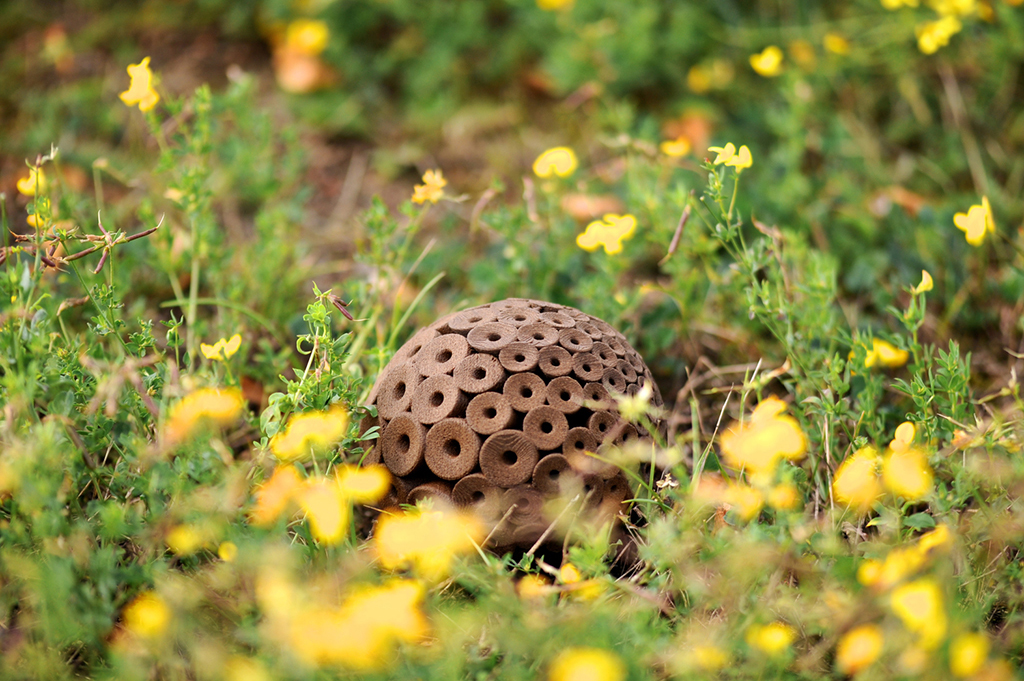 Further information about this thesis can be found on the dedicated website municipalbees.de.