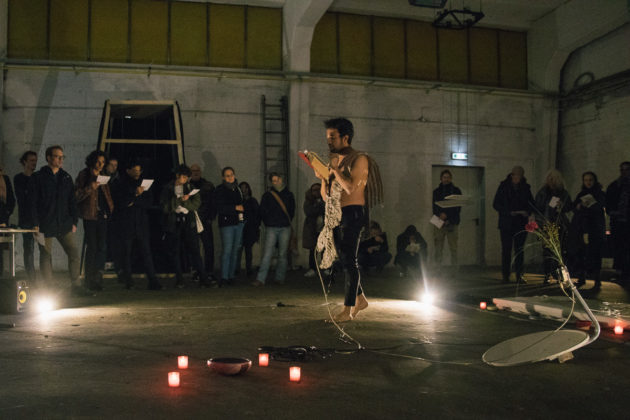 Live performatic poetry reading, that takes Salvadorian author Roque Dalton’s “Love Poem” as a basis to explore narratives of identity and exile. The performance is an amalgamation of data collection, translation, physical material change and sound output. A clay object is meant to have physical contact with the body and hosts a number of humidity sensors, suggesting connections between land and body. The data interpretation drives live change in the narration of the poem. 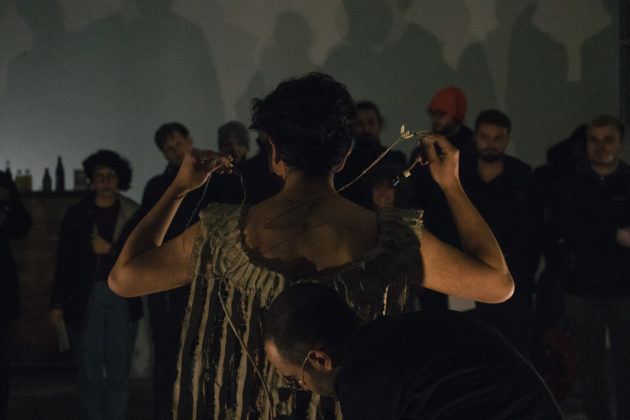 Roque Dalton Garcia (San Salvador 1935-1975) was one of El Salvador’s most prolific poets, and politically active in the years preceding the civil war. His writings explored the idiosyncrasy of what been Salvadorian means, with hints of Marxism, social narrative and humor. He lived in exile in Cuba, Mexico, Guatemala and Checoslovaquia. The following “Love Poem” is one of his most well known works.

*They who widened the Panama Canal
(and were classified “silver roll” and “gold roll”),
they who repaired the Pacific fleet at California bases,
they who rotted in the jails of Guatemala,
Mexico, Honduras, Nicaragua
for being thieves, smugglers, swindlers, for being hungry,
they always suspicious of everything
(“permit me to haul you in as a suspect
for hanging out on corners suspiciously, and furthermore
with the pretentious air of being Salvadorian”),
they who packed the bars and brothels of all the ports
and capitals of the region
(“The Blue Cave,” “Hot Pants,” “Happyland”),
the planters of corn deep in foreign jungles,
the kings of cheap porn,
they who no one knows where they come from,
the best artisans of the world,
they who were stitched by bullets crossing the border,
they who died of malaria
or by the sting of scorpions or yellow fever
in the hell of banana plantations,
the drunkards who cried for the national anthem
under a cyclone of the Pacific or northern snows,
the moochers, the beggars, the dope pushers,
guanaco sons of bitches,
they who hardly made it back,
they who had a little more luck,
the eternally undocumented,
the jack-of-all trades, the hustlers, the gluts,
the first the flash a knife,
the sad, the saddest of all,
my people, my brothers. 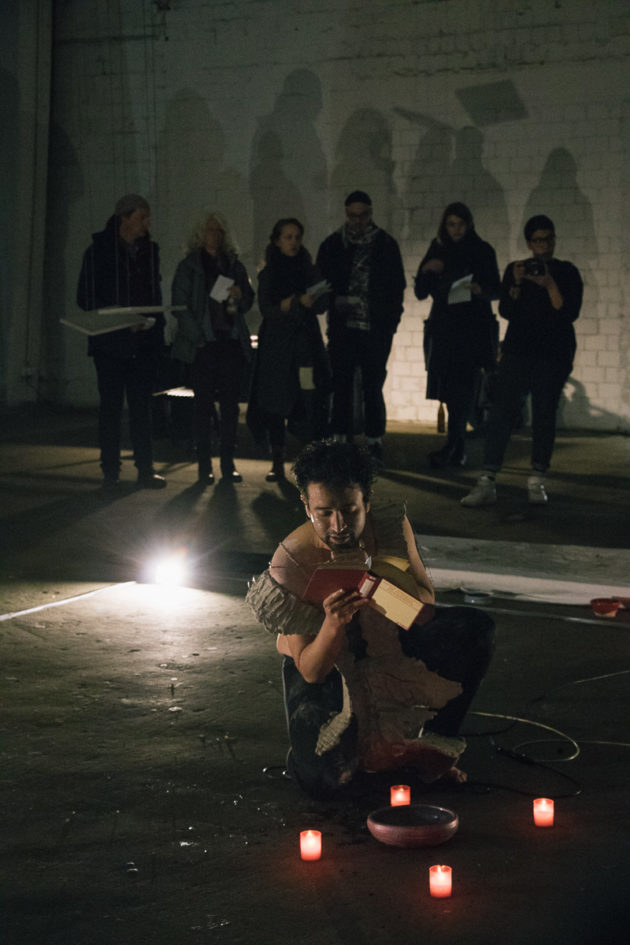 The performance is part a ritualistic process/poetry reading. I use a wet ceramic object/instrument, which resembles a giant leaf. This object is embedded with two humidity sensors, connected to an Arduino, which are constantly feeding data. This two numeric values are then output to a sketch in Pure Data. The variations in readings of the humidity values shift parameters of my voice which is coming from a microphone, sound is heard through two PA speakers. 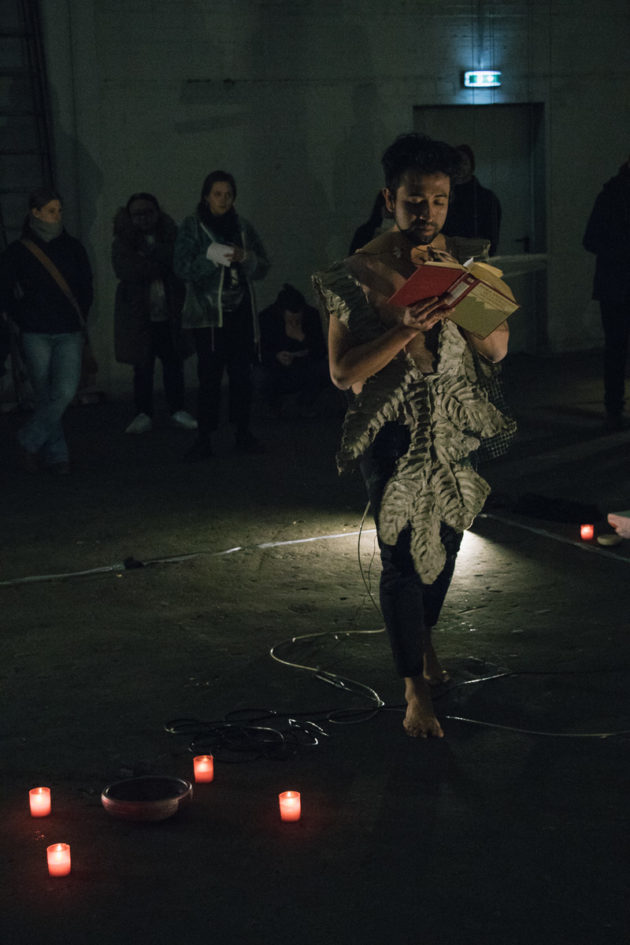 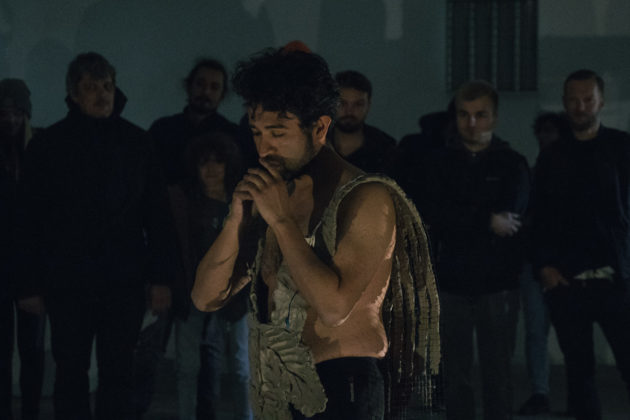 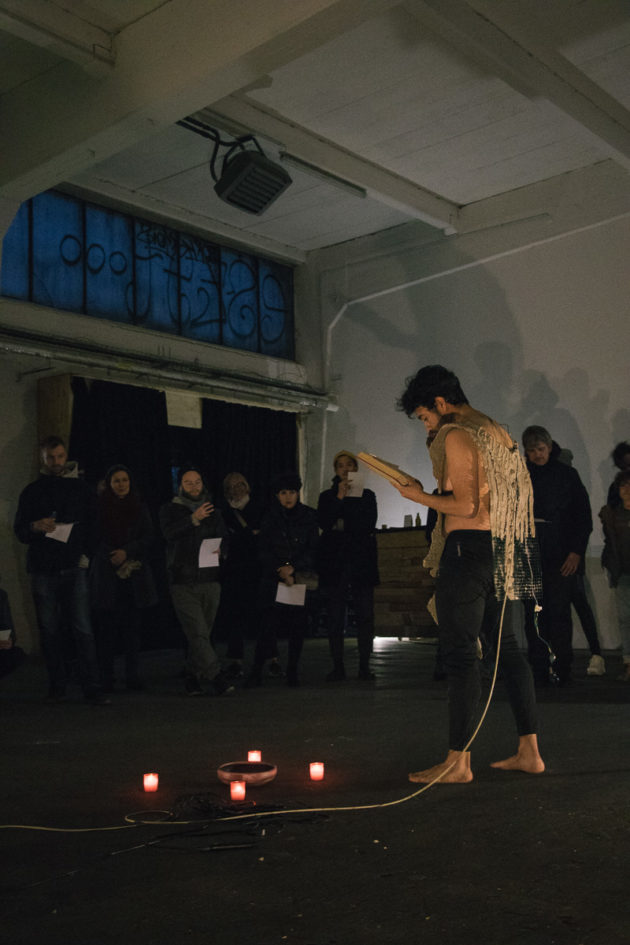