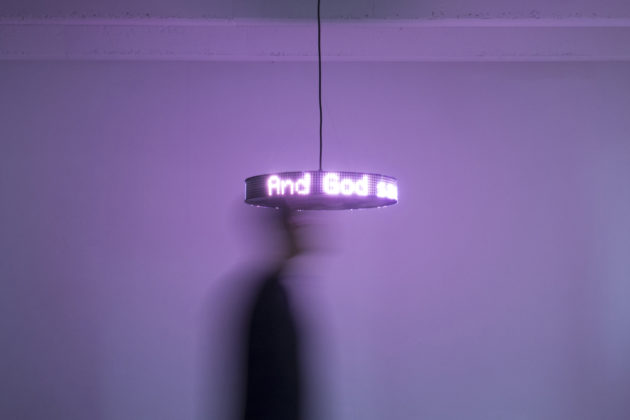 The audio-visual installation represents a secular instance of an ungraspable and unknown entity. It consists of a 360 degree LED Display that frequently reveals seemingly incoherent sentences. The sentences, generated in real time, arise from historical records of all major religions, in order to result in a multidimensional ideology. While examining the boundaries of human belief, at the same time it pictures an artistic investigation on the coherence of technology and religion.

We live in a society in which technology penetrates all areas of life. It shapes our habits, our thinking and the way we communicate. As a counterpart to technology, there is another mighty societal pole, that is able to influence at least as many areas as technology – Religion. It defined social conventions, cultures, as well as moral and ethic perspectives on life. In fact, there are connections, dependencies and interactions between both, that grew together along with mankind over thousands of years. It is arguable if both poles stand in contradiction to each other, since one is all about knowledge, whilst the other one deals with belief. Spiritual tendencies in technology can become indisputably visible in recent days. Furthermore, if the technology is used for spiritual pursuits, at what point does technology itself become an instance of divinity?

A fundamental part of Religion consists of the aim to transcend our nature, body and lives. It briefly, describes a state that is neither graspable with human sense, nor it is located in secular spheres. Deeply rooted in religion, it pictures stadium that can be only reached through the devoted practising of worships. When we are online, we unknowingly follow the same spiritual motivations, of separating our mind from its bodily condition. Online, we are connected to all knowledge of the past and presence. It is a place of a unity of all things, through which one can become supernatural in itself. When technological advancement is pursued in order to overcome human nature, and furthermore transcend mortal and martial concerns completely, we do neither face the real nature nor the real problems that come along with it. Revealing actual tendencies in our way of using technology, could be the first step towards a society of people that deals with its imperfections.

A display made of LEDs, ought to symbolise the changing values of a fully digital world. The display displays words, that use expressions which occur in the Torah, Bible, Koran, Pali- Canon and Smriti. The object, constantly processes, analyses and reads through all religious records across the all major religions of the world. Based on the vocabulary and grammar of these texts it develops a new interpretation, with newly created sentences in real time. What is created, becomes more and more accurately formulated over time, and even hard to distinguish from any human-made sentence. The object is striving for perfection, for transcendence even. Underlined by a dense soundscape, it developes a hardly graspbable omnipresence that emerse the viewer. 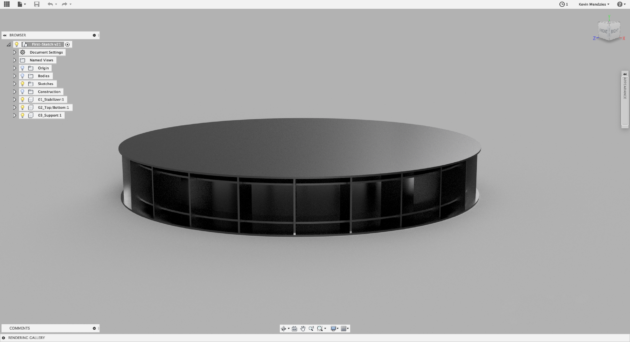 As housing for the object, MDF-wood was the first choice. It is stable enough to hold at least 4 kilograms of electronics in place and at the same time light-weight enough, to not add any unnecessary extra weight to the construction. Hence the round shape of the object consists of a base of 3mm thick MDF, that was cut into shape with the help of a laser cutter. Also, the slightly rough surface provided an ideal ground for additional paint. Around it, there is a thin transparent layer, protecting the fragile leads. This layer is made of a 1-millimetre thin board of Vivak, cut in to shape. The shiny surface of Vivak also added a visually interesting value to the design of the object. Vivak is a material that is usually used for modelling and therefore both lightweight and very flexible at the same time.

The LED Matrix consists of six individual matrix panels, that hold 8×32 RGB-LEDs each, which results in 1536 LEDs in total. Since the LEDs are based on the WS2812 model, it was necessary to control by using a PWM-Signal.

The Software is written in Python and running on Version 3.7. It had to face two main tasks: On the one hand, the script had to read and analyze the text fragments given to it and on the other hand controls the matrix with its 1536 LEDs. From the architectural point of view, it first reads through the text provided on the hard drive of the Raspberry Pi and then analyses it. With full use of the python framework Markovify, it was possible to generate sentences based on the Markov Chain Algorithm. Based on the likeliness of a word following another word, it calculates strings, that sound even human-made. The more content it has, the more precise the grammar becomes. In order to make it sound more human, I developed an algorithm, that generates 500 sentences first and picks the one with fewer flaws in it. After a sentence is made, the software passes this sentence into a dedicated textfile, which gets included in the next text generation loop. With this technique, it feels like a human would have written the sentence.

The next logical step was to output these generated sentences on the LEDs-Matrix. The python library Neopixel offered a starting point for controlling the RGB-LEDs on a Raspberry Pi. But the transformation from a string to a format, that the matrix is able to display, requires a complex algorithm that no python library provides so far. For this reason, the software transforms a given string into a pixelated image and then maps the pixels inside of this image onto the mapping of the Matrix. This process requires a lot of operating resources and resulted in a limitation of speed.