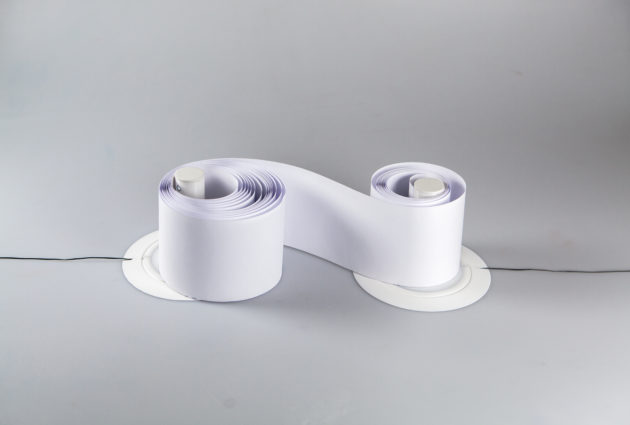 The Inherent Properties of Paper Roll as a Technical Individual

A paper roll can be defined in many ways. The paper roll is generally defined as an artificial substance and a technical object. It is processed from pulp made of lumber as raw material, and is well known as a basic form of ancient Egyptian papyrus as well as an analog recording medium for storing information. Moreover, a person can easily conjure up an image of the continuation of time and history from a long unrolled paper, and picture a compression and storage of information from tightly rolled paper. On the other hand, a thickly layered paper roll has its own inherent material properties. It has materiality of potential energy, a weakness of easy tearing, the flexibility of easy bending, irreversibility of wrinkling, and functional features that wind and unwind.

In this work, a paper roll acts as an individual with its own material properties, at the same time function as a technical object in a system. A paper roll, which can be easily bent, connected, unrolled, rolled, expanded, and contracted, is combined with two DC motors to spatialize and visualize the rotational energy of the motors. It becomes a thread of physical connection and an interaction medium between two motors. 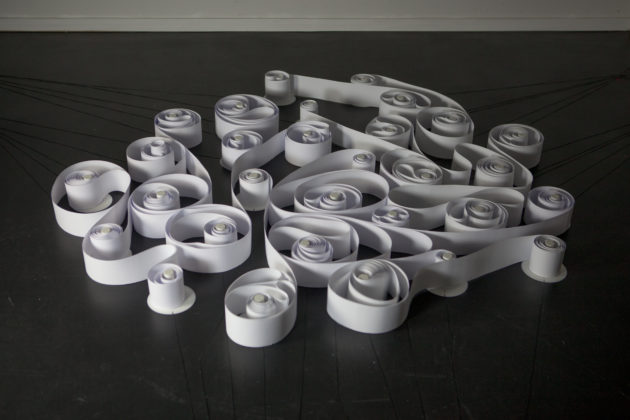 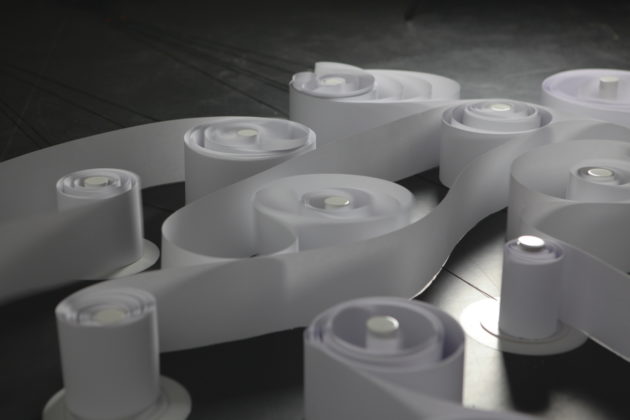 Each motor connected by a paper roll materializes its own energy into paper, while at the same time energy is transferred to the motor on the other side. These two interacting individuals sense each other’s energy and react to each other as a result of the linking paper. Depending on the direction and speed of rotation of the motor, and the amount of paper, the paper is either spread out or wound up. The forms of paper generated from these two interacting motors are the visualization and spatialization of energy that reflect the relationship between the two motors. In this process, the tension and looseness of the paper occur as a phenomenon. At this point, moving paper constantly transforms its shape and creates its own territory. 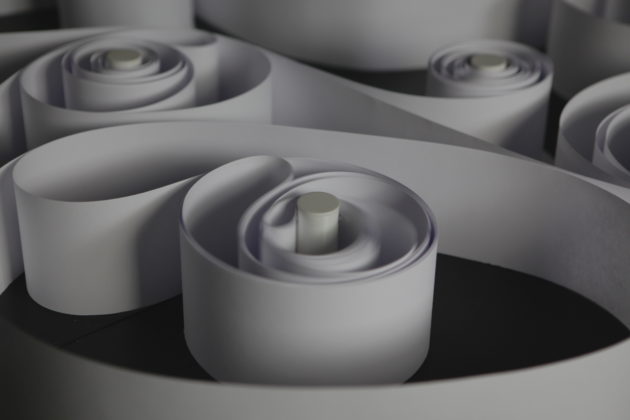 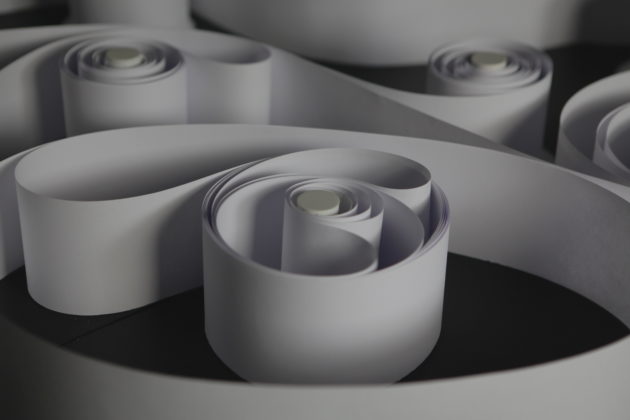 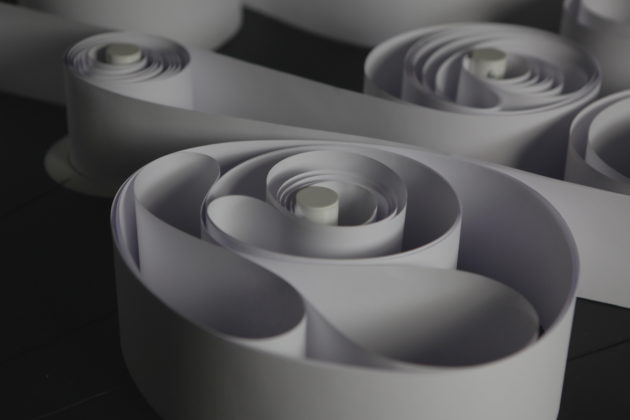 The motor interacts with the motor on the other side connected by paper. While in the process, when the paper is pulled from both sides or when the resistance is generated depending on the amount of paper, the motor comes to a stop because it longer has the power to rotate. When the motor is stopped by an external force, the current of the motor is overloaded immediately. When the current sensor measures the current overload, the motor rotates explosively in the opposite direction for the calculated time, during which the paper is expanded and loosened. Each motor has only two commands that occur as a result of the current overload: rotate left or rotate right. Once the command is executed, the mode of the relationship between each of the two motors changes. The number of states of the two motors is four in total: left, right/right, left/left, left/right, right. The changes happen due to the interaction between the motors connected by the same paper as well as the interaction with the papers of other modules around. 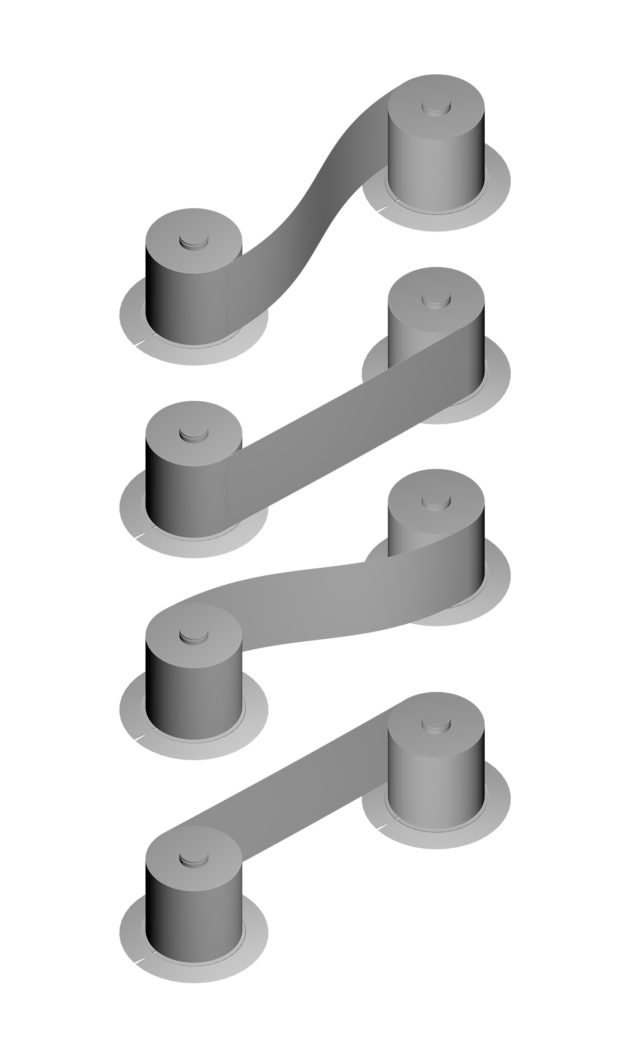 Thirty identical modules consisting of a motor and a paper roll form a system. They are influenced and affected by the movements of the papers and cause certain unpredictable clustering phenomena. In this process, two motor modules combined into a single paper roll can be defined as a cell in cellular automata, which has been transferred from the algorithmic world to the material world. Invisible electrical energy is converted into motion and sound through motors and expressed as a matter through papers. During the numerous interactions of each module, phenomenal choreography such as unpredictable drifts, entanglements, flows, stops, tensions, and expansions of papers are identified. The overall picture formed by all individuals triggers questions on incalculable algorithms and unpredictable events that are defined by chance.

Thus, this work can be technically defined as a kind of finite state machine, more specifically, a cellular automata machine, in which the next state is determined by the current state of the two motors. However, it is almost impossible to predict the following state through the shapes generated by the papers. This is because the shapes of the papers constantly change and simultaneously are the consequence and cause of the following state. 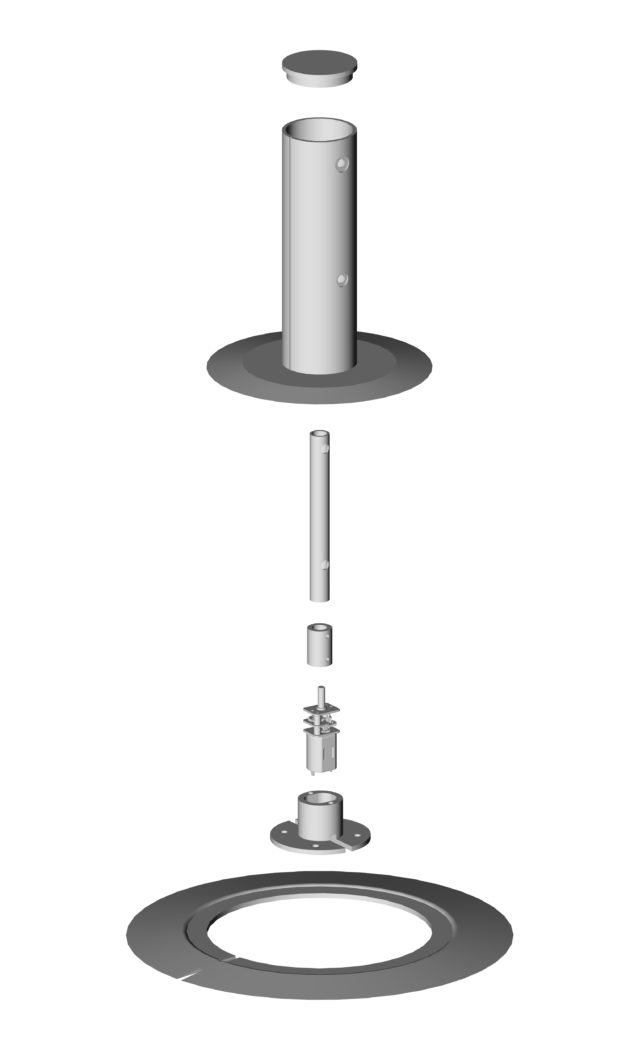 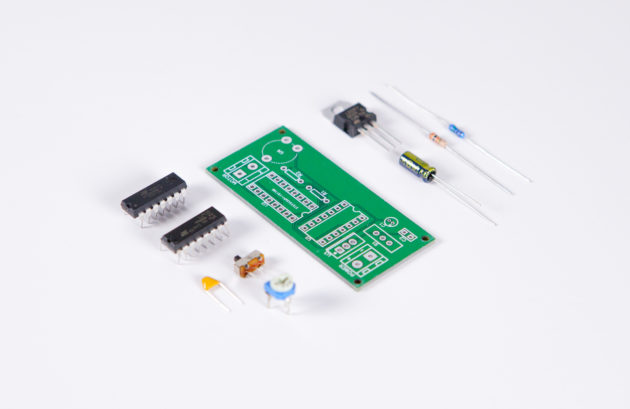 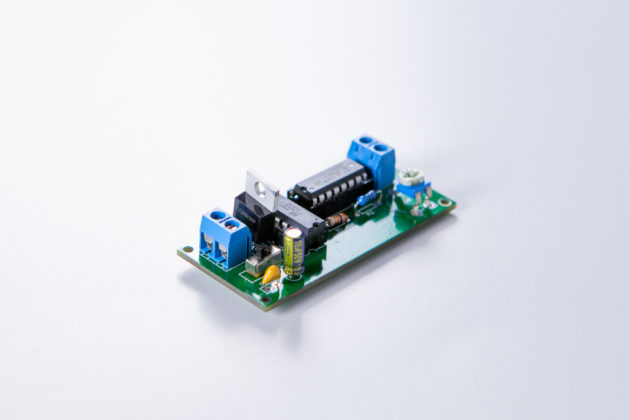 Algorithm and the Material World

Cellular automata exist in the algorithmic world simulated within computer screens, in which the environment is exclusively the other cells around. It creates several cases in their finite topological and temporal conditions and generates specific patterns. However, the flow of energy converted into the paper is applied to the physical laws of the real world consisting of paper and the external environment. There are countless environmental factors in the real world such as the irreversible abrasion and wrinkling of the paper, the operator’s decision about the location of the modules, and friction according to the texture of paper and the condition of the floor, which are all incomputable.

Obviously, each motor’s state consists of just the two simplest binary instructions: rotate left, rotate right. However, when each module interacts with other modules, it is difficult to anticipate where and in what shape the papers will cluster. If one module is observed steadily, the timing of the state transition of the motor can be predicted to some extent, yet, the constant changes in the shape and flow of papers generated by the interaction of three or more modules are unpredictable. In other words, the relationship between the two modules appears in different shapes according to the passage of time, and according to space. In the material world we live in, these immeasurable algorithms are described as coincidence. 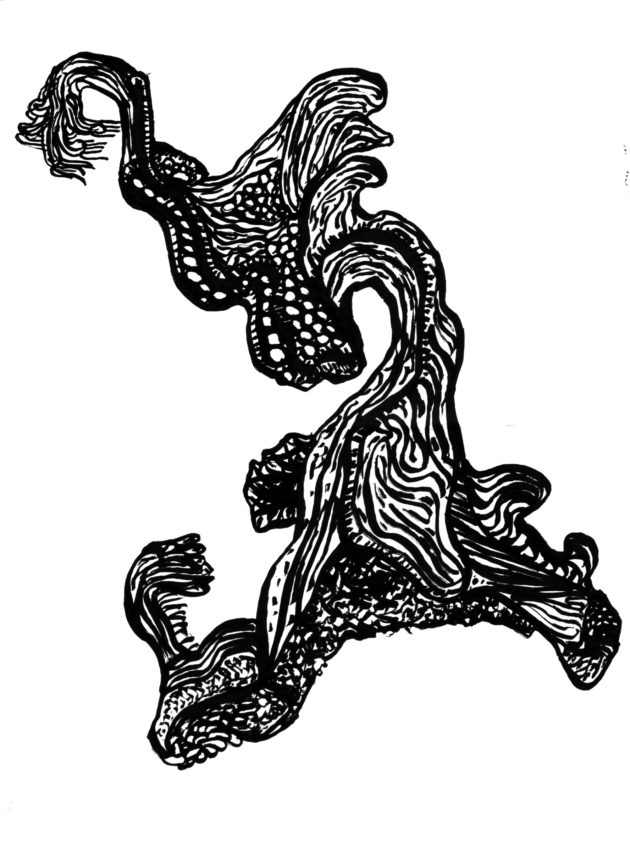 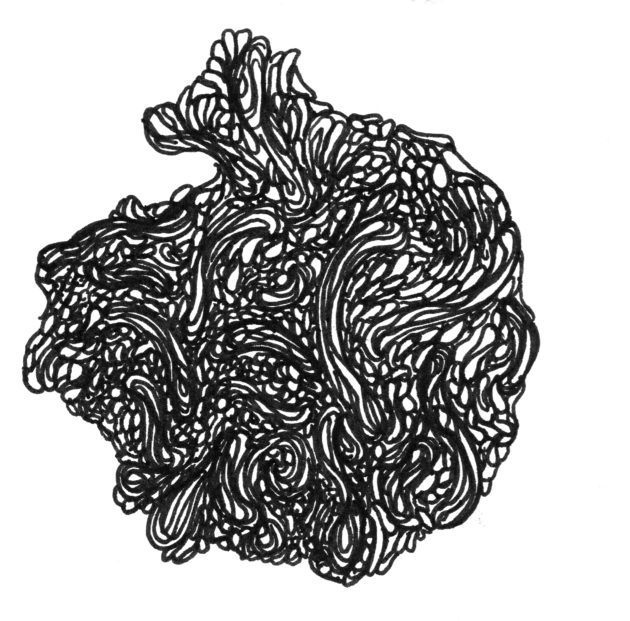 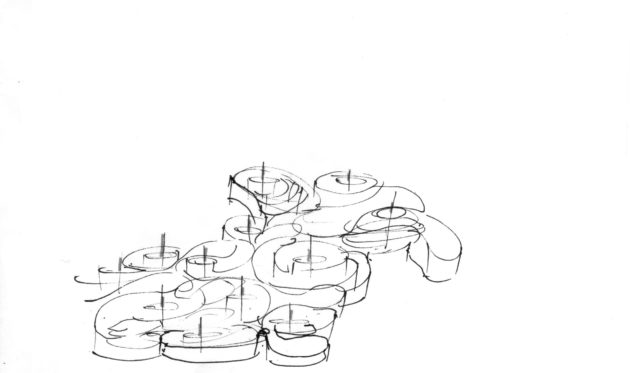 Coincidence – Hard to Calculate in the Material World

In terms of defining the notion of coincidence, it is generally considered in two aspects. The first is a judgment as to whether an event is intended or not. When we attempt to determine whether an event is intentional or not, we come to the conclusion that everything can be interpreted as both coincidental and intentional. As to whether human actions are intentional or not can be distinguished, but it is unclear whether natural phenomena such as the sound of water and trees or the movement of wind are intentional. The intention is a speculative notion that exists only in the human imagination. Everything in the world is a continuous result of the relationship of interaction. I eat because the cells in my body demand energy and the atoms that make up the cells interact with each other. We may ask: Do atoms have a desire? At least, for now, we cannot clearly distinguish between what’s intentional and non-intentional.

The second is the interpretation of physical causality based on time and space, whereby the causality exists; however, in complex systems cannot be calculated by human capacity. All phenomena based on coincidence can be interpreted as aspects of complex systems. The results are anticipated using a stochastic method. 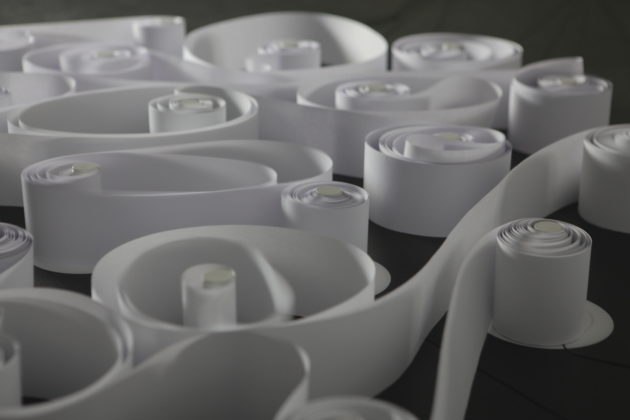 To strictly examine the causality of a phenomenon in nature, it is necessary to return to the beginnings of things. Not surprisingly, we are unaware of exactly when the big bang happened, nor can we detect the worldly changes that happened just seconds ago. Thus, the impossibility of calculating the temporal interpretation of an event that has already occurred is all defined as coincidence. After all, if everything called logic, computational causality, algorithmic correlation, etc. goes beyond the computational range at the level of human cognition, then the existence of non-computability has to be admitted.

On the other hand, this result can only be considered as a matter of the scale of complexity, for the material world is made up of the causal relationships of matter in space-time. Hence, the notion of coincidence is a measure of the incomputable world. We are even uncertain whether the number of relationships that papers produce is infinite or finite. On the contrary, no sign of coincidence is detected in the moving papers. The only things that remain are what could be excessively complicated for humans to calculate. 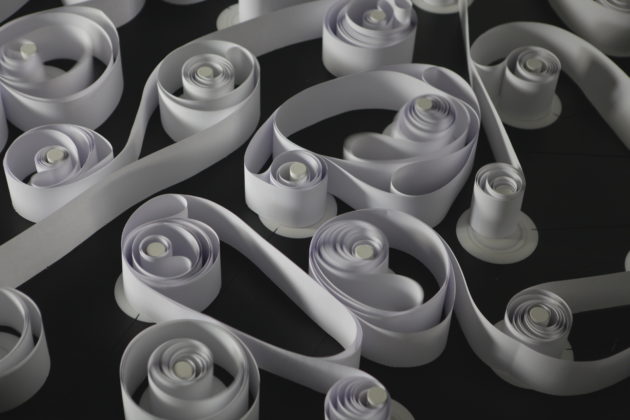